CIMA Q&A with Yohannes Eneyew Ayalew: The Dangers of Media “Ethnification” in Ethiopia 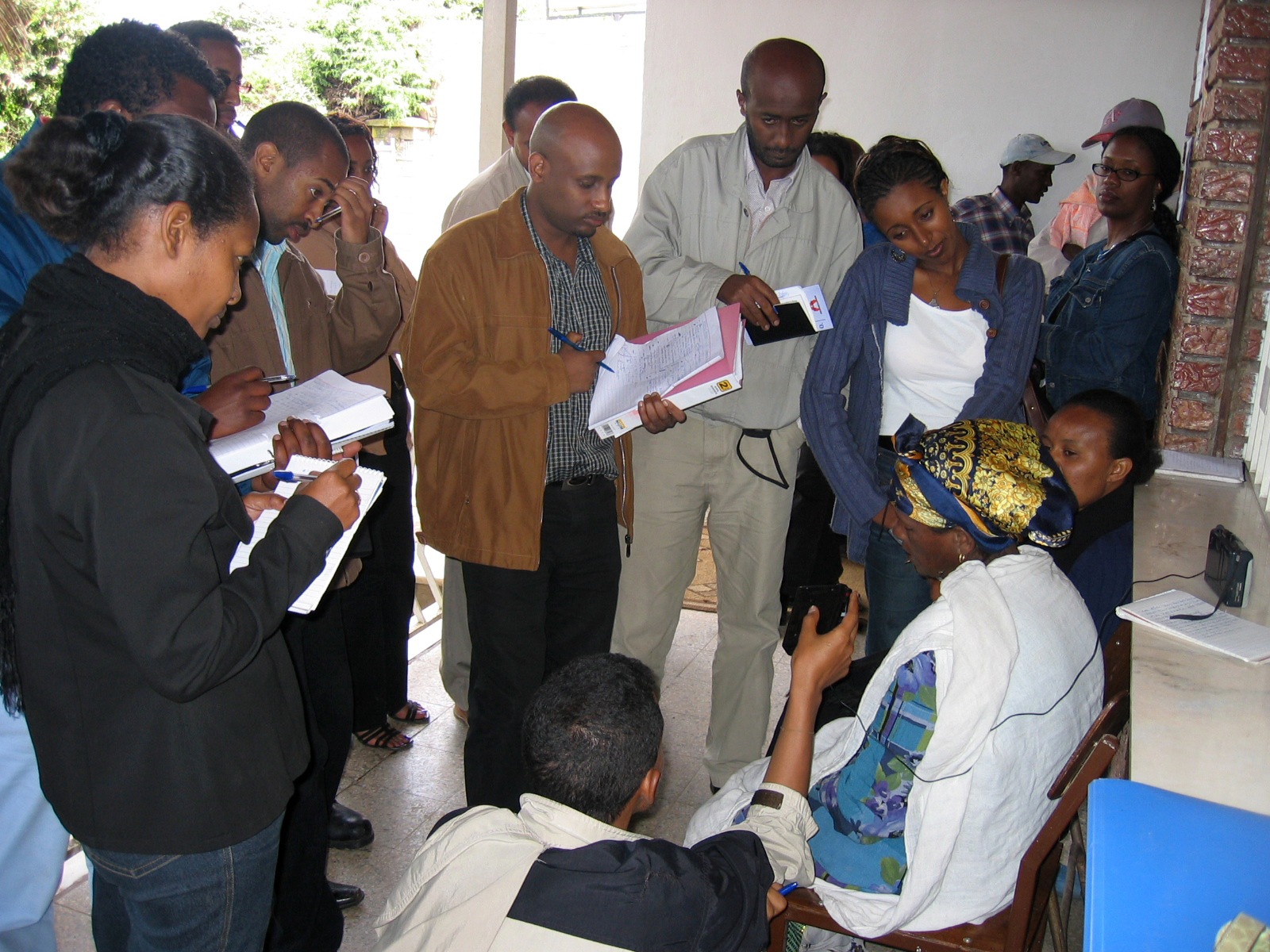 Journalist training in Ethiopia in 2005. Photo by USAID in Africa.

In a year of civil war, thousands of Ethiopians have been killed, millions have been forced from their homes, and all parties to the conflict have committed heinous atrocities which may amount to war crimes and crimes against humanity, according to the latest joint probe of the United Nations and the Ethiopian Human Rights Commission. The conflict has been fought along regional and ethic lines, which overlap in Ethiopia.

Those same lines of conflict have been drawn across Ethiopia’s media sector, which was liberalized when Prime Minister Abiy Ahmed first took office in 2018. A recent IMS study by Terje Skjerdal and Mulatu Alemayehu Moges details how the ethnicized politics of the country has subsumed many journalists and their audiences. In a process Skjerdal and Mulatu describe as “ethnification,” media houses aligned with a single linguistic group are promoting narratives that intensify political fractures, raising questions about how to ensure Ethiopia’s media industry remains free, independent, and ethical.

In this post, Ethiopian legal scholar and 2020 Open Internet for Democracy Leader Yohannes Eneyew Ayalew discusses this issue of media “ethnification” in Ethiopia. He explains how it applies across different forms of media, and the roles of various stakeholders, including social media companies and the government, in finding solutions. His answers have been edited for brevity and clarity.

The “ethnification” of media in Ethiopia is profoundly widespread. Except for some entertainment media, ethnicized media has now become the hallmark of the Ethiopian media ecosystem. At every level, it seems to me that the media is deeply polarized. This holds true no matter the type of media organization—be it mainstream media or digital media—and, more worryingly, among both public and private media houses. For example, all regional states have their own public mass media houses, which are named after the dominant ethnic group, such as the Oromia Broadcasting Network (OBN), Amhara Media Corporation (AMC), and the Tigray Mass Media Agency (TMMA), to name a few. The same pattern is also visible in private media houses, such as the Oromia Media Network, the now defunct Asrat Media, and the Tigrai Media House (TMH). While at times these media organizations host and broadcast content reaching different demographics, they predominantly frame their narratives and programs in ways that serve their respective ethnicities.

Media houses are organized to serve and satisfy political interests and ideologies. In Ethiopia, media often function as mouthpieces of their owners’ political philosophies. As the third wave of democratization was blossoming around the world in the 1990s, Ethiopia was transitioning from communist rule. During this period, the Ethiopian media had relative freedom and were entertaining diverse political discourses. However, the new government led by the Ethiopian People’s Revolutionary Democratic Front (EPRDF) [the former ruling coalition] chose ethnicity as an organizing political factor and officially cemented a system of ethnic federalism in the 1995 constitution. This means the constitution tends to favor group rights—particularly those of ethnic groups—over individual rights.

While ethnic federalism empowered these groups to self-administrate, previously dominant groups were silenced in the name of diversity. As a result, the idea of a pan-Ethiopian identity and common citizenship was de-emphasized. Ethnicity has become a prime basis of people’s identity and permeates almost all aspects of public and private life in Ethiopia. For example, media houses echo ethnic demands. The facts people choose to believe depend on ethnicity. It is an important consideration for election to public office. It has also become an informal defense before a court of law.

Against this backdrop, media houses are highly susceptible to the influence of dominant regional groups, and outlets inevitably reflect the ethnic cleavages of the regional state in which they are operating.

This question raises a host of other questions, rather than answers, and requires an empirical investigation. You can’t simply unhook ethnicity from newsrooms, news coverage, or media engagement. Not to mention the fact that, in divided societies like Ethiopia, moving away from ethnic-led media engagement is not an easy undertaking. Rather, it requires strenuous political leadership, political moderation, elite bargaining, and even reconciliation. Recent experiences have shown that the overpoliticization of ethnicity led to discord, sectarianism, and civil war. These upheavals have taken a heavy toll on the lives of millions in Ethiopia. No society can move forward by institutionalizing ethnicity and tribalism in its political and civil spheres, including its media system. The situation we are in reminds me of a powerful quote from the former Mozambican President Samora Machel: “For the nation to live, the tribe must die.” Here, the quote referred to political identification with tribal groups, rather than being a member of a tribal group. To move forward, we need to ease the impacts of overly politicized ethnic identity on the media environment through a range of measures, including legal and policy interventions.

Making ethnicity less salient in media and politics doesn’t mean casting off ethnic identity and linguistic diversity. Ethiopia is home to more than eighty different ethnic and tribal groups. Without compromising national unity, we must foster linguistic diversity as part of human rights in newsrooms, programming, and staffing, so that various groups can consume news in their preferred languages. One way to strike a balance is by establishing community media outlets. The newly approved Media Proclamation also encourages community broadcasters to focus on the local cultural and social issues of different groups.

It is undeniable that social media platforms play both positive and negative roles in Ethiopia. Following a brutal government crackdown, social media helped amplify the voices of Muslim communities in Ethiopia under the famous movement called “Dimitsachin Yisema,” which literally means “Let our voices be heard,” in 2012. Mass protests in the Oromia and Amhara regions were orchestrated through social media in 2016 and 2017. However, the use of social media has not been without challenges. Bad actors, including state and non-state actors, have polarized the social media space in Ethiopia. Although social media platforms are striving to regulate user generated content on their sites by taking down hate speech, fake news, and coordinated inauthentic behaviors, they must redouble their efforts when it comes to less affluent markets like Ethiopia. For example, Facebook employs around 15,000 content moderators and has partnered with 60 journalism organizations for factchecking in countries around the world. Yet, it doesn’t specify the country-by-country breakdown of moderators, nor is the company transparent about moderators’ activities.

While these companies’ proactive content moderation efforts are commendable, overly aggressive and partisan content curation chills freedom of speech in Ethiopia. Following the start of the war in Northern Ethiopia, users noticed that Facebook tends to pull down pro-government content, as well as content from pan-Ethiopian activists and human rights activists. As a result of Facebook’s perceived anti-government stance, the Ethiopian Information Network Security Agency (INSA) is aiming to develop an alternative social media platform in Ethiopia. This could lead to further constraints on freedom of expression by placing the power to regulate online speech firmly in the hands of the national government.

It is worth noting that the major content moderation challenges in Ethiopia are mainly related to Facebook’s insensitivity to local contexts, linguistic injustice, a lack of content moderators, and overreliance on partisan user reports. In the absence of sufficient content moderators with knowledge of a given country, social media companies are often forced to rely on user reporting. In divided societies like Ethiopia, user reports can often be weaponized as part of coordinated partisan attacks. The resulting partisan moderation will only further exacerbate polarization, rather than iron out the differences in Ethiopia. Therefore, social media companies should do better and work towards impartial, objective, and transparent content moderation practices to help avoid amplifying polarizing content. To that end, these companies need to hire more professional moderators with the linguistic capabilities and the contextual knowledge to take a more sensitive and balanced approach to content moderation.

Pluralism, the presence of diverse and different views, is the bedrock upon which resilient media houses are built. Promoting and protecting its ideals is paramount in Ethiopia. Both the constitution and the Media Policy that was adopted in 2020 require media houses to be diverse and inclusive. However, this constitutional mandate is repeatedly flouted by public media in practice.

While Ethiopians have a constitutional right to freedom of expression, in the absence any sort of monitoring mechanisms, an indiscriminate approach to broadcast licensing facilitates the promotion of one-sided, radical narratives from ethnic media houses whose owners have political aspirations. The lack of editorial guidelines, ethical responsibility, and professionalism in digital media and social media is another factor at play in fueling the ongoing polarization in the country. I hope the forthcoming Digital Media Directive, which is meant to regulate the previously unchecked online media landscape, will fill some of these gaps. The Directive will improve accountability of online media by promoting the representation of diverse viewpoints, requiring adherence to editorial guidelines and professional standards, and setting penalties for breaches of the Directive.

The Media Policy underscores the practical deficit of pluralistic views in Ethiopia. To fill this deficit, the policy devises a plan that requires all media houses, including online media, to dedicate between 15 percent and 40 percent of their content to private, affiliate, or freelance producers. While self- and co-regulation are important to addressing these kinds of challenges, it will take time before Ethiopia can develop robust self-regulatory bodies that can effectively monitor how news outlets are implementing these requirements. In the meantime, the Ethiopian Media Authority, which regulates media licensing, must oversee how media houses implement this constitutional and policy obligation.