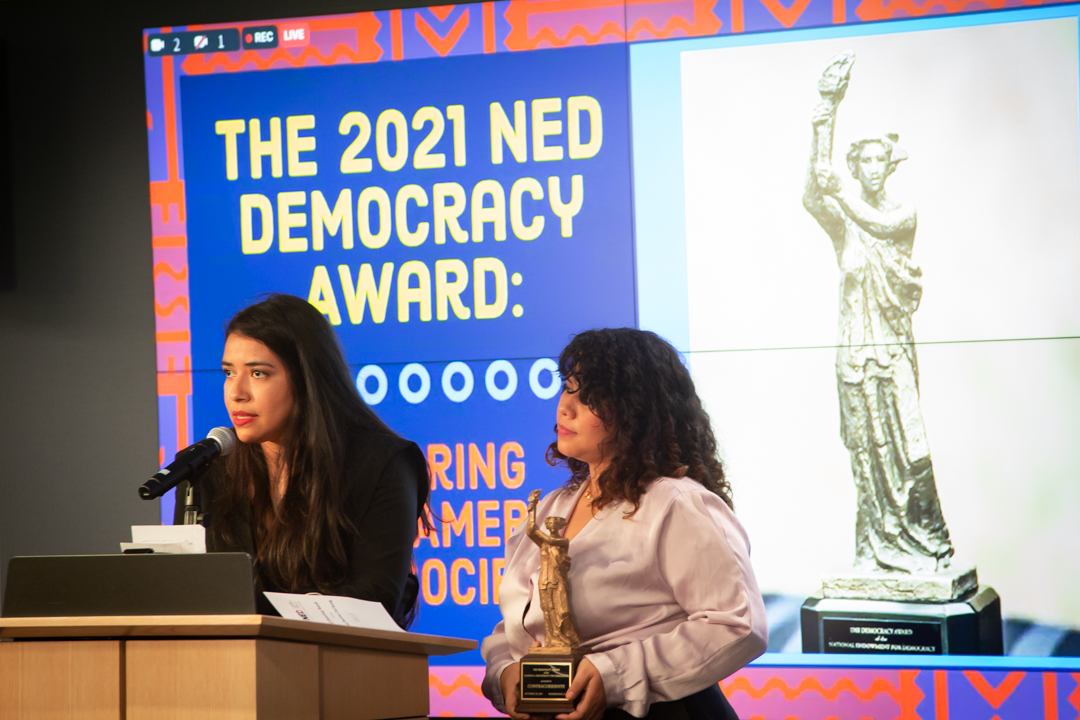 The warnings came through intermediaries: friends and acquaintances. Jennifer Ávila and her team at Contracorriente were told that their reporting on the offshore dealings of Honduran politicians and elites, as revealed by the Pandora Papers, would get them in trouble.

“Many of them used intermediaries to communicate with us, more than anything to try to get us not to publish,” Ávila said in an interview with CIMA, speaking about the people and organizations they had investigated. “To say this is dangerous. That they were going to sue us. That it’s not really like you think. And everyone who communicated with us must have been talking [to one another] because they all gave particular and similar messages.”

For her safety, Ávila left Honduras on the eve before Contracorriente’s reports were published, a tense moment at the culmination of a six-month long effort with the International Consortium of Investigative Journalists and Latin American Center for Investigative Journalism (Centro Latinoamericano de Investigación Periodística, CLIP). The investigations revealed offshore accounts held by former minister Yankel Rosenthal Coello, a convicted money launder, and former president Porfirio Lobo Sosa, who has been included on the Engel List for allegedly accepting bribes from drug traffickers. Amid the millions of leaked documents were details of offshore dealings by a current Honduran legislator and two mayors. For their bravery and commitment, Ávila and her co-founder Catherine Calderón were recognized with the National Endowment for Democracy’s (NED) 2021 Democracy Award.

The tale of Contracorriente reveals how fiercely independent journalism is threatened today and, consequently, how important international support can be for up-and-coming young news outlets. Contracorriente currently depends upon grants and philanthropic donations because advertising revenues in Honduras are either too small, or come with strings attached that compromise journalistic autonomy. The organization leans on investigative journalism networks to raise the standards and the reach of their work. In the absence of legal protections for journalists in Honduras, Contracorriente’s journalists need protection from the visibility lent by organizations such as the Committee to Protect Journalists and the National Endowment for Democracy. Free Press Unlimited, SembraMedia, Alterna, and Interchurch Coordination Committee Development Aid (Interkerkelijk Coördinatie Commissie Ontwikkelingshulp, ICCO) helped Contracorriente develop a plan for financial sustainability.

Contracorriente’s story, however, also reveals some of the shortcomings and limitations of that support. As its names implies, Contracorriente swims against the current—in an environment that has become increasingly hostile to their work. A question remains over how international support can not only buttress the likes of Contracorriente in this effort, but in effect turn the tide by fostering the conditions in Honduras and elsewhere that protect and sustain independent journalism.

From its inception in 2017, Contracorriente swam against the current, one of the few sources of independent, high-quality reporting on corruption in Honduras. The outlet was created just as a young, middle-class protest movement against corruption exploded on social media and filled the streets of cities across the country. Ávila, who was a journalist, and Calderón, who was an activist, saw a gap. Young people were sharing their stories of how corruption had affected them and their families. They were looking for hard-hitting reporting and analysis that could point to a different future for Honduras. Mainstream outlets weren’t delivering, and the protest movement itself did not have the ability to moderate the torrent of information on social media.

“My frustration as an activist was to see a ton of information arriving, people are getting fired up to make demands,” said Calderón, speaking about her efforts as a movement organizer before joining Contracorriente. “They’re on social media denouncing corruption at various state institutions, but those of us [working as activists] were not prepared to manage all that information. What else could we do but share the same information [on social media] without verifying, and in the process we we’re just giving ammunition to the corrupt to defend themselves better.”

As Ávila covered the protests, repeatedly interviewing Calderón, the two women recognized a shared interest in building a media platform that could provide verified, trustworthy information on corruption scandals and provided insightful analysis on the possible solutions. They decided then to form Contracorriente.

The Importance and Limitations of International Support

Two forces have sustained Contracorriente: their small but loyal following, which includes a community of over 50 contributors who have written for the website, and international support. Ávila and Calderón say they have benefitted from a wave of direct funding to independent media. They hope that support can continue, especially in countries—such as those in Central America—where democracy is backsliding. Indeed, a recent CIMA report shows that independent media are frequently the last line of defense against democratic erosion. They point to how international networks of journalists— International Center for Journalists, Organized Crime and Corruption Reporting Project, CLIP, Arab Reporters for Investigative Journalism—are fostering a new generation of investigative outlets around the world. And they are thankful for the support that has enabled them to launch a separate public relations business that subsidizes Contracorriente’s work while respecting its editorial independence.

While international support of this nature for Contracorriente and its kindred outlets around the world should be sustained, if not redoubled, can more be done to improve the enabling environment for their work?

Contracorriente, for all its international support, still faces a hostile environment in Honduras, where at least 40 journalists have been killed in the last decade. Over 90 percent of these killings go unpunished, despite the creation of a Special Prosecutor’s Office for the Protection of Journalists. Since the 2009 coup, shutdowns and blackouts have also stifled the independence of media outlets.

Contracorriente was the only outlet in Honduras with access to the Pandora Papers, an arrangement that guaranteed the safety and integrity of the project, but they were startled by the reluctance of other Honduran outlets to cover the Pandora Paper stories after they had broken. They felt most alone—and vulnerable—at that time.

This lack of coverage of a massive global story that has profound local implications is notable. Despite Contracorriente’s groundbreaking work, it continues to stand alone. Donor support has strengthened this one outlet, but the enabling environment for independent journalism in Honduras has not improved.

Can more be done to lift the industry as a whole in Honduras? To foster solidarity, even among competing outlets, to the principles of press freedom? Ávila and Calderón also point to the limitations of international support in Honduras for the Special Prosecutor’s Office for the Protection of Journalists.

According to Ávila and Calderón, the special prosecutor’s office was established due to international pressure to address impunity for crimes against journalists in Honduras. However, local civil society actors and journalists were not consulted in its design. As a result, the office relies on the national police, an institution that has historically turned a blind eye to attacks on journalists, to investigate these crimes. “The national police are either absent or are the repressors of journalists, and yet are tasked with protecting journalists,” Ávila said. “There are certain incoherencies.”

They say the solutions to these broader threats to independent media need greater input and participation from local civil society actors, who could have counseled the international community to build an independent reporting mechanism for the special prosecutor’s office, among other possible changes. Such observations resonate with the a growing recognition of the need to build coalitions for media development that can work from the bottom up. Contracorriente cannot be expected to swim eternally against the current.

Nick Benequista is senior director of the Center for International Media Assistance at NED.