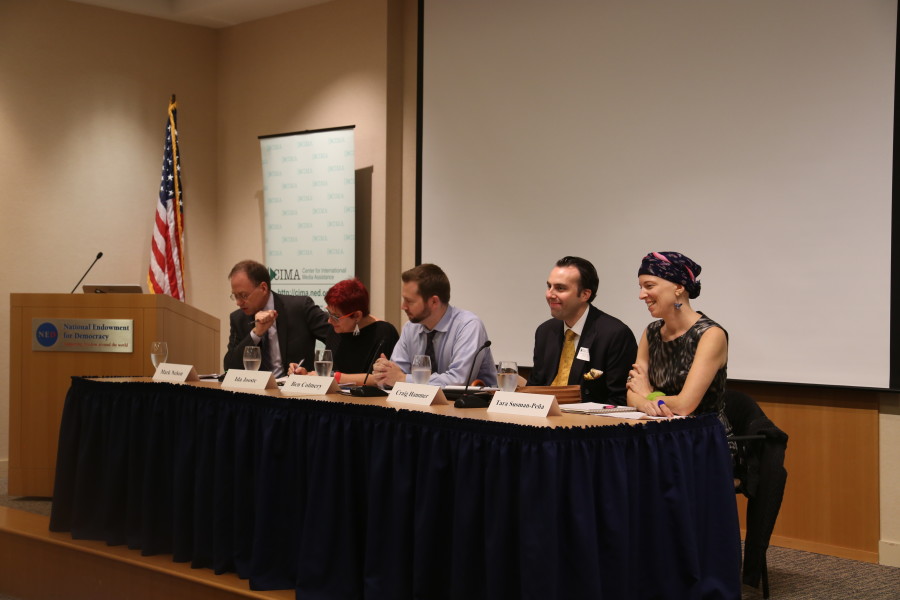 Mark Nelson introduces the panel at the event.

One of CIMA’s first blog posts highlighted the importance of raising the visibility of media development across sectors. Since then, we have taken an active role in working toward building ties with other sectors and researching how we can increase funding for media in an effort for greater development. This idea was at the heart of our most recent event: How Data Journalism Drives Results in Developing Counties,” as panelists discussed the power of the media as a method of engaging all sectors of development.

As government and private data continues to grow, media has a real opportunity to create an environment for change by highlighting the work of data journalism as media can provide things that other stakeholders often cannot. From the groundbreaking work that Internews in Kenya is doing to ICFJ’s InfoAmazonia project , it is clear that data has the potential to drive change.

However, in today’s world where anyone can be a journalist, it is essential for professional journalists to attain the skills to produce valuable information. “Journalism without data ends up being largely anecdote,” said Ben Colmery. Things become a bit more problematic when journalists are not trained in how to work with large data sets. Besides lacking the skills for analyzing, Ida Joose, the country director for Internews Kenya, said that journalists didn’t think they even had the right to have access to data. No matter the circumstance, the most important thing is that the availability continues to grow. As Craig Hammer mentioned, “The data isn’t perfect, but it doesn’t have to be. The point is that it’s out there.”

“The data isn’t perfect, but it doesn’t have to be. The point is that it’s out there.” -Craig Hammer

New projects to educate journalists, growing availability of government data, and an effort by the development community as a whole seem to be making an impact on the daily lives of people around the world, and the media development community should seize the opportunity to showcase the importance of a free and independent media. As Tara Susman-Pena wrote in CIMA’s paper about data journalism, “Without media that can make sense of this growing mountain of data, the promise of the transparency revolution is likely to be lost.”

Click here to watch a video of the discussion.