Freedom of the Press 2015: New Report 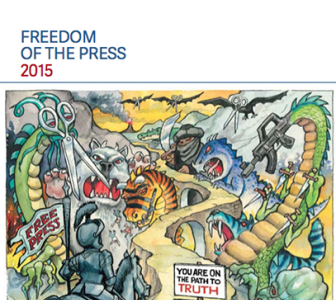 Press freedom has declined to its lowest point in more than ten years—an unfortunately common figure we’ve seen in Freedom House’s analysis, as the global Internet freedom scores released late last year revealed a similar downward trend. Perhaps most disturbing is the rate of decline in press freedom, however, as this year marked the lowest one-year drop in a decade, according to Freedom House’s 2015 report.

The 2014 numbers are discouraging, and one especially bleak number remained constant from 2013 in Freedom House’s analysis: only one in seven people in the world live in a country with a free press.

To that last theme, speakers at an event for Freedom House’s report release Wednesday morning noted that the levels of sophistication in restricting press freedoms extended beyond blatant intimidation or violence against journalists.

Manipulating the message through the media is becoming an increasingly popular tactic for both state and nonstate actors, who flood the media space with propaganda. While speakers cited examples from Eastern Europe and the Middle East, there are implications for all regions in the world.

Vanessa Tucker, vice president for analysis at Freedom House, said Wednesday that the challenge for the next few years in the former Soviet states and also other regions in the world, will be “how to counter that propaganda without resorting to propaganda of your own.”

Though it might seem that press crackdowns are often just indicative of larger problems in conflict or authoritarian countries, research showed that democracies were also guilty of restricting press freedoms, as was the case in the United States, South Africa, and Korea.

“Freedom of information is a pillar of democracy, not a threat to it,” said Vanessa Tucker, vice president at Freedom House, said at the organization’s report release Wednesday morning.