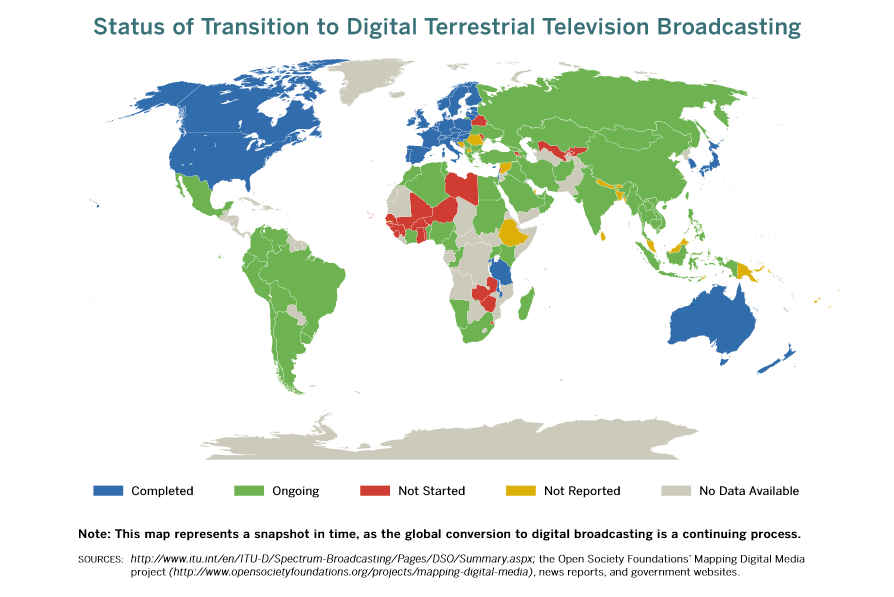 This year marks a deadline for a global agreement to transition from the obsolescent analog technology to digital broadcasting for television. Though the deadline is self-imposed, with no formal sanctions  if it is missed, it marks a possible turning point for many countries’ media development.

The switch would provide opportunities for new programs and multimedia offerings, according to the ITU, and entrance into an expanding market and global connections. Nearly 120 countries are slated to have made the transition from analog to digital broadcasting by this coming June, but the challenges to implementation are immense.

CIMA’s latest report, Throwing the Switch: An Update on the State of the Global Transition to Digital TV Broadcasting by John Burgess sheds light on these difficulties and tracks developments since CIMA first addressed the switch to digital broadcasting in a 2009 paper.

Though many would assume the switchover is a simple matter of exchanging television signals, the process is much more complicated, altering the types of and the means by which content is delivered. New standards must be put in place, new frequencies assigned, new equipment installed. As one official at the ITU notes to Burgess, “it’s about changing the whole industry.”

Aside from the obvious technical challenges to the digital switchover, perhaps the most formidable obstacles stem from those seeking to control content through political or financial interference. With 5 billion television sets in use globally, “manipulation of the transition can deprive large groups of people of access to independent voices and alternative views,” Burgess writes.