It’s not what the Hong Kong protesters are saying: It’s how they’re saying it 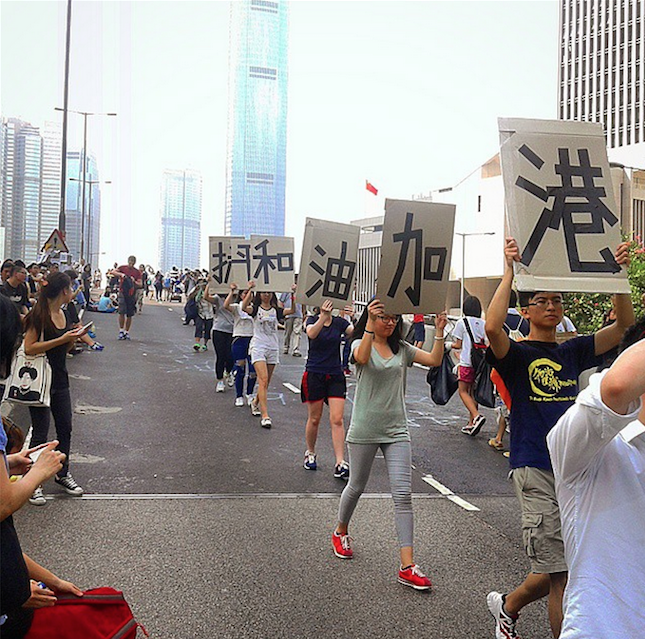 Many parallels can be drawn between the 2014 Hong Kong student protests and the Tiananmen Square protests of 1989.  Both protests demand higher political participation, both see student organization as the driving force behind them, and the protestors in each movement use non-violent techniques. Although these two protests are separated by 25 years, comparison between the two offers an interesting perspective on the way mass communication has changed: it’s not what protesters are saying, it’s how they are saying it.

Pro-democratic protesters and citizen journalists have leveraged innovative tools to organize and raise awareness about their cause. The tool of choice for person-to-person communication in Hong Kong is FireChat, created by San Francisco based tech company Open Garden. FireChat has proven effective against the looming threat of Chinese censorship and monitoring. Operating through a mesh network, it also helped to avoid protester shutdown when there were “… rumors circulating that authorities would shut down mobile phone networks.”

Even in situations in which possible mobile shut downs and/or censorship don’t apply, FireChat’s mesh network is a more effective communication tool, due to its ability to connect via Bluetooth to other phones without internet access. In a recent interview with American University’s online global security masters program, Andrew Antuna, an on the ground observer of the Hong Kong protests, described the use of FireChat:

“FireChat has been used by the protesters for a variety of purposes. Activists will forward spreadsheets listing supplies needed at food and first aid stations at the various protest sites around Hong Kong (e.g., Central, Admiralty, Causeway Bay, and Mong Kok). It can also serve as an alert system to warn protesters and protest encampments about police movement or the approach of pro-Beijing protesters or unruly characters attempting to threaten, assault, and/or grope protesters or attempting to tear down the barricades or supply stations. Also, protesters many times send messages of encouragement to each other through the app.”

Pro democratic protests weren’t the intended use for FireChat, as it was created for messaging at densely populated concerts where cell towers have the tendency to jam. But its functionality serves a higher purpose. Similarly citizen journalism in Hong Kong has served a higher purpose, as professional journalists are being arrested and deterred from covering the protests.

Citizen journalism in citizen driven movements presents many challenges; among them, the the spread of misinformation. Antuna addressed issues with verification of citizen content in Hong Kong:

“With regard to citizen journalists, yes, people have been making an effort to cross check each other and make sure that what’s being reported is as accurate as possible. It’s hard to fight the rush and desire to be the first to break a new development, but people are learning to exercise some restraint and at least attempt to cross-reference or verify that they actually understand what’s going on. Some citizen journalists do have a professional journalistic background and have been helpful in verifying information and being reliable sources of information. Others have just been writing what they’re seeing but are showing some restraint by saying ‘awaiting further details’ and then updating or correcting their earlier reports.”

Innovative technology has allowed protestors to utilize skill sets and spread information more effectively and rapidly than 25 years ago. It’s hard to derive certainties from ongoing protests, and when they end it’s hard to predict what political events will follow. However, the trends we see in this protest tell us that another talking point should be added to the ongoing question of whether the private sector is the key to reversing internet censorship and oppressive regimes. As technology progresses, it is protests such as those in Hong Kong that will allow innovators to analyze and build upon the effectiveness of  tools  that will give more power to consumers. The use of these tools creates a blueprint for other citizen driven movements, which are essential for human progress.