Independent news producers in Indonesia say the dominant platforms for digital content distribution, namely Facebook and Google, are taking advantage of them and undermining their viability as media businesses. While this is an increasingly common complaint from news producers, especially in the Global South, in Indonesia the chief editors of 27 online news publishers decided to joined forces and confront the Silicon Valley behemoths.

Leaders of the newly formed Indonesian Cyber Media Association (known by its Indonesian name: Asossiasi Media Siber Indonesia, or AMSI) say Facebook and Google share too little ad revenue with local producers and often make unannounced changes to their platforms that can devastate media businesses overnight. Despite recent efforts on the part of the two companies to build bridges with the news industry, most of these initiatives have taken place in the West with few, if any, opportunities for engagement with news producers in developing markets like Indonesia.

As Bambang Harymurti, founder and CEO of Tempo Magazine notes, “[Washington Post owner] Jeff Bezos can call Facebook and say ‘please don’t do this to us’ but we can’t.”

AMSI hopes to change that by strengthening the leverage of the country’s online media sector. Indeed, short of anti-trust regulations to reign in these global platforms, collective bargaining may be the only way for media producers in smaller markets in the Global South to push back.

According to a recent report published by the World Association of Newspapers and News Publishers (WAN-IFRA), Google only shares 20 percent of ad revenue with content producers and, while there was no data available from Facebook, the WAN-IFRA report estimates that globally, Facebook likely shares a much lower percentage with publishers. Further compounding the problem for producers in smaller markets is that the Cost-Per-Miles (CPM), the rate by which digital ads are valued, are much lower than the CPMS their peers in the west receive.

In Indonesia, nearly 9 in 10 mobile internet users between the ages 16 to 35 use Facebook; roughly half of Facebook’s 2 billion users access their news through the platform. 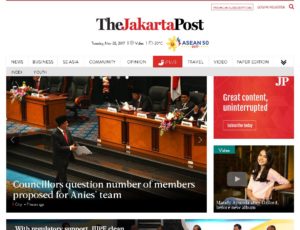 For Nezar Patria, digital editor in chief of the Jakarta Post Online, contending with Facebook and Google is both a necessity and a constant challenge.

According to Patria, 40 percent of the news site’s traffic comes through Facebook – so when Facebook alters the way the platform features or organizes content, it can have a huge impact on the site’s traffic. Patria cited an anecdote from his previous position as managing editor at the online news site VIVA.co.id. The site used a Facebook fan page to distribute content by soliciting likes – allowing them to push content directly to accounts that liked the page. This seemed to work well, but one day all that changed. Facebook quietly altered its algorithm; reducing the number of followers directly reached by content featured on their page by 95 percent– a devastating development for a news producer that relied on the platform to reach its audience. What compounded the frustration for Patria and his colleagues was that they only figured out what happened after discussing the issue with fellow news publishers – Facebook made no public announcement of the change.

According to AMSI’s Secretary General, Wahyu Dhyatmika, “the need to band together against the big platforms like Facebook, Google, UC (Alibaba)” was a major driver for the formation of AMSI. Among other things, they hope to increase the CPM for Indonesian producers to $.50, nearly triple the current rate, and to create avenues for engagement with the platforms when issues arise.  And, according to Scott Galloway, founder of digital intelligence firm L2, collective bargaining is exactly what media companies should be doing:

“I think what publishers have done is the worst exchange in the history of media. The New York Times and others take their content, which is difficult and expensive to produce, and give it to platforms for free, or almost free. The platforms earn a dollar, and the publishers get a dime.”

Indeed, the asymmetrical arrangement between media producers and online platforms has drawn the skepticism of media producers like Harymurti who says that, too often, outlets are being “duped” by the promise of Google’s AdSense and Facebook’s Instant Articles, which result in such little revenue for the publisher, especially publishers in the Global South.  But by banding together at the national level, even small digital news publishers could benefit from a strengthened bargaining position. With over 100 media companies already on board, AMSI has the potential to become a significant political force on these issues in Indonesia.

But taking on global platforms is not the only goal for AMSI. According to Wahyu, Indonesian digital media producers also see AMSI as a way to collectively address the scourge of misinformation and to deal with broader questions about the evolving business model for independent media producers. He hopes that AMSI can help “create an environment where cyber media that produce quality journalism can fare better than those who are only doing click bait journalism.” AMSI leadership plans to support “verified” online news publishers and conduct public outreach to promote digital subscriptions and payment for quality news and information as a public norm.

ASMI also aspires to become a player in broader national policy debates around press freedom and freedom of expression. Wahyu expects that AMSI will “play a role in the civil society space and will become an advocate for more robust laws on freedom of expression online, better access to government data, reform for whistleblower laws, and other human rights issues around media and communications.”

AMSI is an example of collective action that the media sector can take in the digital age to address some of the industry’s most vexing problems: that have made it exceedingly difficult for media producers to succeed as businesses. After all, it is as profitable businesses that independent media can most effectively contribute to democratic societies. If AMSI proves successful in its pursuits, it could have a valuable impact on its members’ ability to navigate the evolving online space, according to Wahyu. But perhaps just as importantly, if AMSI proves successful as an exercise in collective bargaining – it could be a lesson for online news publishers elsewhere in the world.