Journal of Democracy 25 Years In: An Interview with Marc Plattner 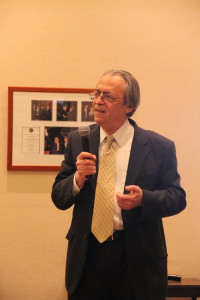 CIMA sat with Marc Plattner, the co-founding editor of The Journal of Democracy, to discuss the publication's 25th anniversary, which will take place on January 29, 2015.

Taking the Temperature of Democracy

“When we started, it was a time when, suddenly, democracy was moving to the center of public consciousness,” Marc Plattner, the co-editor of the Journal of Democracy, says. “There was not a wide literature on democracy in developing countries.”

Plattner, also vice president for research at the National Endowment for Democracy, is discussing the evolution of a scholarly journal that focuses particularly on politcal development. He’s founding co-editor of the Journal of Democracy, now in its 25th year, and is reflecting on the Journal’s role.

“To do its work well, NED had to keep up with the best thinking on democracy,” Plattner says. “The Journal gave us an opportunity to do that.”

Is Democracy in Decline?

The theme of the 25th anniversary issue takes on what has been a tumultuous few years for democracy around the world. Every five years, the Journal’s anniversary issues take inventory of global trends, but this year, the question was grim: Is democracy in decline?

“It’s a question on everyone’s mind these days–the news for democracy in most parts of the world is not great,” Plattner says. “Some of the events of 2014 were a wake-up call.”

Democracy became the global standard of political legitimacy by the turn of the century, but in 2014 it was under assault. Indeed, 2014 marked a shift, with much of the energy toward political development seeming to be on the side of authoritarianism. The Journal’s January issue has strong opinions on both sides of the question about whether democracy is in decline, but Plattner, generally an optimist, is pessimistic about the near term, though he believes the downward trend can be reversed.

“Most people want democracy. The general demand for democracy has not weakened,” Plattner says. “But alongside this, where democracy has been established, the feeling is in a lot of places that it hasn’t delivered the goods.”

He sees three factors that could be contributing to the shrinking support for democracy: the setbacks seen in a number of countries around the world, the economic crisis in Western democracies (that makes the model seem less appealing), and geopolitical developments like the annexation of Crimea and the emergence of ISIS, all of which contribute to making democracy look weak.

“Democracy is a way of choosing leaders, but it’s also a form of government,” he says. “I don’t think people are losing their desire to choose their own leaders and have their individual rights and liberties protected–but what they’ve come to doubt is whether democracies are capable of governing effectively.”

Role of Media in Democracy

Plattner notes in his introductory essay in this quarter’s Journal that democracy is mired in a period of stagnation throughout the world, indicated by a flat line in Freedom House’s Freedom in the World Index.

To get a real sense of where democracy stands, though, monitoring the institutions supporting democracy is equally important. This includes rule of law, free and fair elections, and of course, freedom of the press. And as CIMA has noted in the past, there seems to be evidence of a correlation between press freedom and democratic freedom, and as the line for democracy has stagnated, so has the flat line of press freedom.

And at a time when media freedom is under pressure, even in retreat in some places, and the platforms by which media and citizens communicate and share news, information, and opinions, is under assault, Plattner also stresses that link as crucial for the coming years.

“The role of free media is critical–you can’t really have democracy without it,” he says.