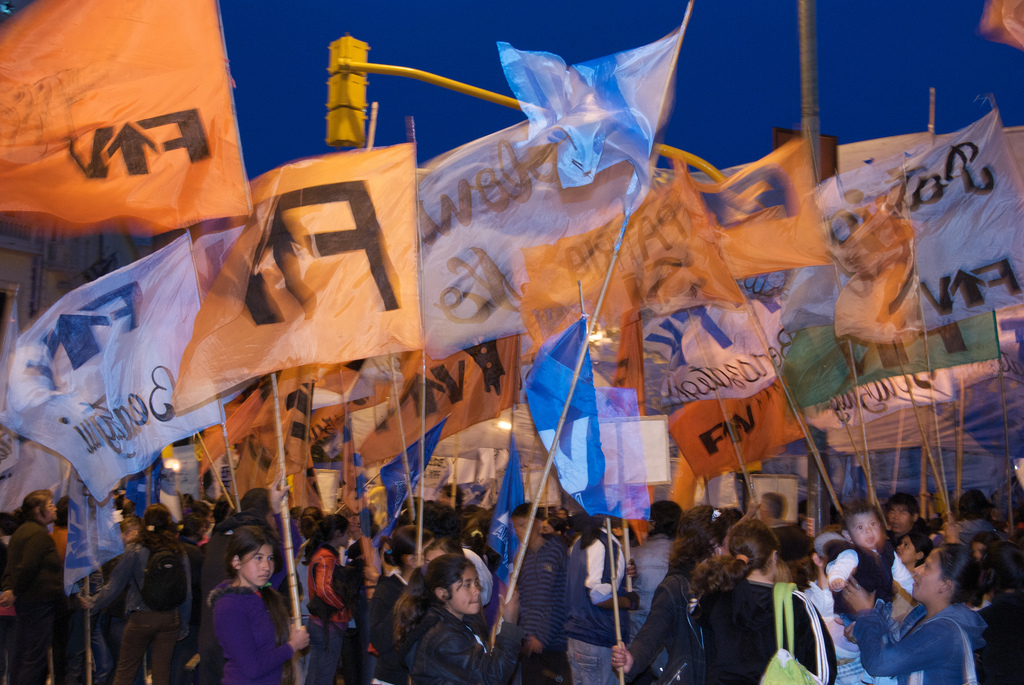 Media reform protesters in Buenos Aires. (Photo by Beatrice Murch and available on Flickr. Licensed via Creative Commons - CC BY 2.0)

Editor’s Note: On Tuesday November 15, Professor Waisbord will be discussing the insights from his book on Latin America at the National Endowment for Democracy with anyone interested in pushing through media reforms in other parts of the world. If you will be in Washington, DC, and would like to attend the noon event, please RSVP to katem@ned.org.

Policy reform in favor of more plural and independent media is possible when global networks collaborate with national activists. This is the important lesson gleaned from a series of examples in Latin America that are the subject of a new book that I co-authored with Maria Soledad Segura titled Media Movements: Civil Society and Policy Reform in Latin America  (Zed/U of Chicago Press).

Washington, DC, is home to many global actors committed to supporting freedom of information, fighting oppressive libel laws and promoting plural media ownership—among other key elements to a vibrant and free media. The key lesson for them is that they are unlikely to succeed alone. In fact, we did not find any examples of rapid and sustainable changes single-handedly driven by global programs. Instead, we found success stories where global actors worked patiently and diligently with local activities, building awareness and strong coalitions on the ground that could act when opportune conditions or political junctures arose.

But global actors are nonetheless essential in many of the cases we examined. Indeed, they can be seen to bolster local efforts aimed at strengthening media pluralism in five concrete ways:

I’d like to briefly touch on each of these points so that you can get a better understanding of our overall argument, and I hope to see you on November 15 to discuss these issues further.

Participation in transnational networks helps connect local activists to transnational communities of practice with shared interests, goals, and expertise. Latin American media movements have long recognized that transnational activism was critical to push for media reforms. It is not exaggerated to say that virtually every organization working on different aspects of media pluralism in the region is connected to other regional and global associations. Why this matters? Transnational networks facilitate the exchange of ideas and expertise around well-defined shared interests. They show “power in numbers” to various constituencies. They demonstrate that problems are not unique to specific countries, and that approaches and proposed legislation have similarities. They are platforms for mutual learning.

Funding is another important contribution of global networks to strengthening local organizations in the context of international media assistance and media development programs. Several organizations have relied on international funding for operations and activities. Many are financially dependent on grants, consultancies, and other forms of funding offered by international donors. Typically, funding is available for specific projects rather than for institutional expenses. International funding is particularly significant considering that local funds, whether from governments or philanthropic institutions, are limited for initiatives related to media policies and freedom of speech. Also, many organizations have been reluctant to rely on official funding for their activities to preserve autonomy.

One challenge for local activists is the influence of donors’ priorities on their work. Donors don’t have similar levels of interest across issues and countries, and their priorities are subject to changes. At times, dependence on foreign funding creates problems. The volatility of donors’ priorities change has tremendous impact on the financial situation and the survival of local organizations. From cycles of interest in specific issues in international aid among donors to changing and unpredictable local situations, a host of factors affect their agenda on freedom of expression. Because donor programs are generally focused on specific issues, opportunities for addressing various problems of public communication widely vary. There has been more funding support for the promotion of independent journalism, the elimination of libel laws, the regulation of official advertising, and public access to government information than for tackling market concentration or the legalization of community media

Global organizations and networks also bring visibility and legitimacy to local activists and demands in the eyes of domestic actors, particularly governments. Local organizations usually confront difficulties to gain visibility and recognition in domestic politics. Ties with global organizations offer local activists opportunities to coordinate actions and solidify their stature both locally and internationally. Cooperation with transnational networks and organizations, with well-coordinated actions and specific demands and messages, are critical to increase the chances of gaining prominence and respectability – conditions that essential for successful policy advocacy.

Linkages to transnational networks and organizations also contribute to bolstering the rights-based policy frames underpinning the demands and proposals of local media activists. Just as global agencies and coalitions bolster their visibility and legitimacy, they also give credibility to policy proposals grounded in the right to communication. Foregrounding communication as a human right contradicts perspectives that narrowly identify freedom of expression with ownership rights and unregulated markets. Support for rights-based argument is laid out by international organizations in various ways: press conferences, advocacy meetings, and annual reports documenting national and regional situations. Transnational programs, agencies and activism are critical for the diffusion of human rights as the new norm for grounding media legislation. Local organizations and activists are able to show that their demands are in agreement with global norms. By signaling that their demands are grounded in the discourse of global networks and agencies and standard international legislation, local media movements are able to reaffirm the credibility of their arguments and objectives.

Finally, international networks and organizations reinforce the strategic goals of local activists by engaging in moral persuasion. They have used their “bully pulpit” power to call on actors, particularly governments, who disregard or fail to guarantee basic rights. By doing so, they resort to symbolic sanction and praise to bring up issues and generate pressure for change. Just like human rights and other movements, they have used “naming and shaming” mechanisms to denounce violations as well as official disinterest in specific transgression and other matters. Such actions are premised on the universal acceptance of specific norms such as equal rights to free expression. Denunciations generally remark upon inconsistencies between the behavior of specific actors, namely governments, and international and national laws and norms accepted by the global community.

Not all global organizations have had similar interest in using their platforms for moral persuasion. At times, inter-governmental organizations, international non-government organizations, and foundations have forcefully denounced governments for perpetrating or condoning crimes as well as failing to ensure basic rights to public expression. Certainly, such decisions are essentially political. Not all global organizations and leaders are equally interested in taking open critical positions vis-à-vis governments and domestic actors such as media owners, political parties, and activists. Strategies and positions are contingent on specific mandates as well as international and domestic circumstances. Some organizations, particularly agencies of national governments, are subjected to political imperatives that curb their ability to take open political positions.

Still, it is important to underscore that global organizations approach moral persuasion gingerly and make careful decisions about when and how to criticize domestic authorities and other actors. Also, it is important to point out that not all governments are equally sensitive to denunciations about a vast range of media issues. Some are sensitive, especially in particular junctures; others are unruffled by “naming and shaming” tactics.

In summary, transnational networks contribute to media pluralism by supporting the organizational and strategic goals of local media movements. They do not unilaterally lead to changes in media policies yet they can make a difference by playing supportive roles and closely collaborating with organizations. What is needed is a flexible approach that adjusts priorities and programs to local conditions and opportunities.