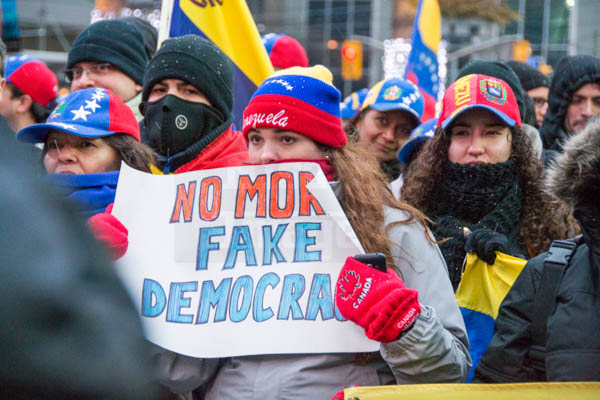 The media environment in Venezuela remains repressive and closely tied to the Maduro government, making it nearly impossible to publish content that questions the government narrative.

Today, the wide-read daily newspaper, El Nacional, remains one of the last independent and critical sources of information for Venezuelans. Beginning in 2012, the Venezuelan government has silenced critical voices, including El Nacional, by refusing to allow them import currency for media outlets to purchase paper for print. Not only has this simple administrative pressure squashed press freedom, limited available space for advertising, and caused stories to go unpublished; it has also reduced the number of pages published, thereby putting journalists out of work.

Limited access to printing paper due to government interference is not a problem unique to print media outlets in Venezuela. In Argentina, critical outlets were similarly threatened when the country’s largest paper mill was shut down, leading to a shortage of a fundamental necessity for a print newspaper–paper.

In an effort to help their colleagues in Venezuela, neighboring countries throughout Latin America have tried to alleviate the printing crisis in Venezuela. On March 4, 2014, the Colombian Association of Newspaper and Media Editors (ANDIARIOS) created the initiative “We are Venezuela, without press freedom, there is no democracy.” This initiative allowed other Latin American news outlets to donate a portion of their papers’ content to Venezuela-specific issues. Although this effort helped spread Venezuelan-related problems to a larger audience, it fails to address the fundamental issue within the country.

At first glance, an obvious solution might be for the Venezuelan print media to move online given the global trend in this direction. However, the Internet does not appear to be a great solution to the problem as Venezuela has the second slowest Internet speeds in the region, following Cuba. The average connection speed in Venezuela is approximately 1.4 Mbps. Rural Venezuelans endure the slowest Internet connectivity,  and they are perhaps the most in need of diversified media content as they tend to be more receptive to the government narrative.

It remains critical that media outlets seek additional means to communicate with these lower income segments of society that often receive one-sided government news content. Although broadcast news remains the dominant medium for news in the country, government policies that undermine the basic operations of print media is yet another way the Venezuelan authorities are limiting freedom of the press in the country. With elections around the corner on December 6, the need for truly independent and sustainable media in Venezuela is crucial more than ever.