Promoting Inclusive information in Mozambique: The Experience of TV Surdo

The founder of TV Surdo, a video news outlet run by deaf and hard of hearing (HOH) individuals Maputo, Mozambique, has been deaf himself since the age of five. Because the schools in Mozambique are not equipped to accommodate children with different abilities, Sousa Camanguira struggled just to finish school. After graduating, he started working at the Mozambique National Association of the Deaf (ASUMO) teaching children sign language. It was at this point in time that he came to fully understand that the key to these children’s future success was access to information – something very difficult to get when many news outlets were largely inaccessible to them.

Information as a tool of self-determination

Inspired by deaf TV programming he saw in South Africa, Camanguira decided to establish TV Surdo (Deaf TV) in Maputo in 2008. This was a challenging task given that starting a media station from scratch can be quite difficult. However, TV Surdo gained support from USAID’s Media Strengthening Program (MSP) and received technical training on video shooting and editing, photography, professional journalism, and TV production and presentation from IREX. In February 2017, TV Surdo officially started broadcasting a weekly news program through the largest independent media group in Mozambique. More recently, the technical assistance has evolved to focus on organizational and operational issues as the news organization develops and tries to create a path toward sustainability.

The stories on TV Surdo cover all the regular topics of the mainstream media, but they do also focus on issues of particular interest to the deaf community. TV Surdo uses an inclusive programming model, which means that in addition to programming that caters to deaf Mozambicans, there is also programming that hearing and non-hearing people can consume together. Subtitles, sign language, and spoken words are included in each video. Hearing and deaf reporters work together in teams to conduct interviews, gather footage, and edit the content to ensure an inclusive process and perspective.

Many of these stories show disabled people in a positive light, which helps show that when given equal opportunities people with disabilities can do the same things that those without disabilities can. This is particularly important in Sub-Saharan Africa where there are negative stereotypes and a lack of cultural acceptance of deaf people, which contributes to increased stigmatization of deaf children who are often hidden from society. 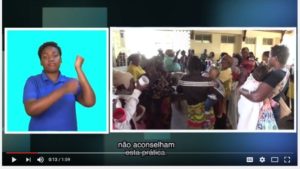 A quick look at TV Surdo’s YouTube page shows the range of programming: a program on maternal health, Mozambican exports, education for people with disabilities, and sports competition. In addition to broadcasting  30 minute TV programs on a private TV channel in Mozambique, TV Surdo has an active presence on social media, including Youtube, Twitter (@tv_surdo), and Facebook, allowing for greater distribution and impact. “These publications help deaf people to feel that they have equal opportunity to access information. This allows deaf people to be informed, which did not happen before, and is a sign of progress,” Camanguira says.

From news to advocacy

Not surprisingly, many of the media professionals at TV Surdo share a passion to help extend equal access to information to disabled and abled people alike. This has meant the organization as a whole has actually embraced specific types of advocacy – something that many media outlets would often avoid.

TV Surdo’s advocacy efforts have included campaigns for the government to enact real change that would benefit disabled citizens of all types. This advocacy push has happened at the same time as the staff makeup has also become more diverse to better serve a wider audience. Now there are both physically and visually impaired reporters on staff. Thus, in the future TV Surdo plans to partner with the main disability advocacy organizations in Mozambique in order to create a broad coalition pushing for change.

As the capacity of TV Surdo grows, more people will benefit from their programming and advocacy efforts; USAID and IREX hope that this model may be replicable in other African countries. MSP is working with the TV Surdo staff to become a strong, independent organization by helping to improve financial and administrative processes, to increase the technical knowledge of the staff, and to encourage the organization to develop a strategic plan for the future so that this work can continue after the USAID funded project ends.

Jessica Sadler is a Program Coordinator in the Information and Media Practice at IREX, in Washington, DC. She supports projects in MENA, Central America, and Sub-Saharan Africa.