State takeover of public media in Poland: Is an illiberal axis emerging within the EU’s walls? 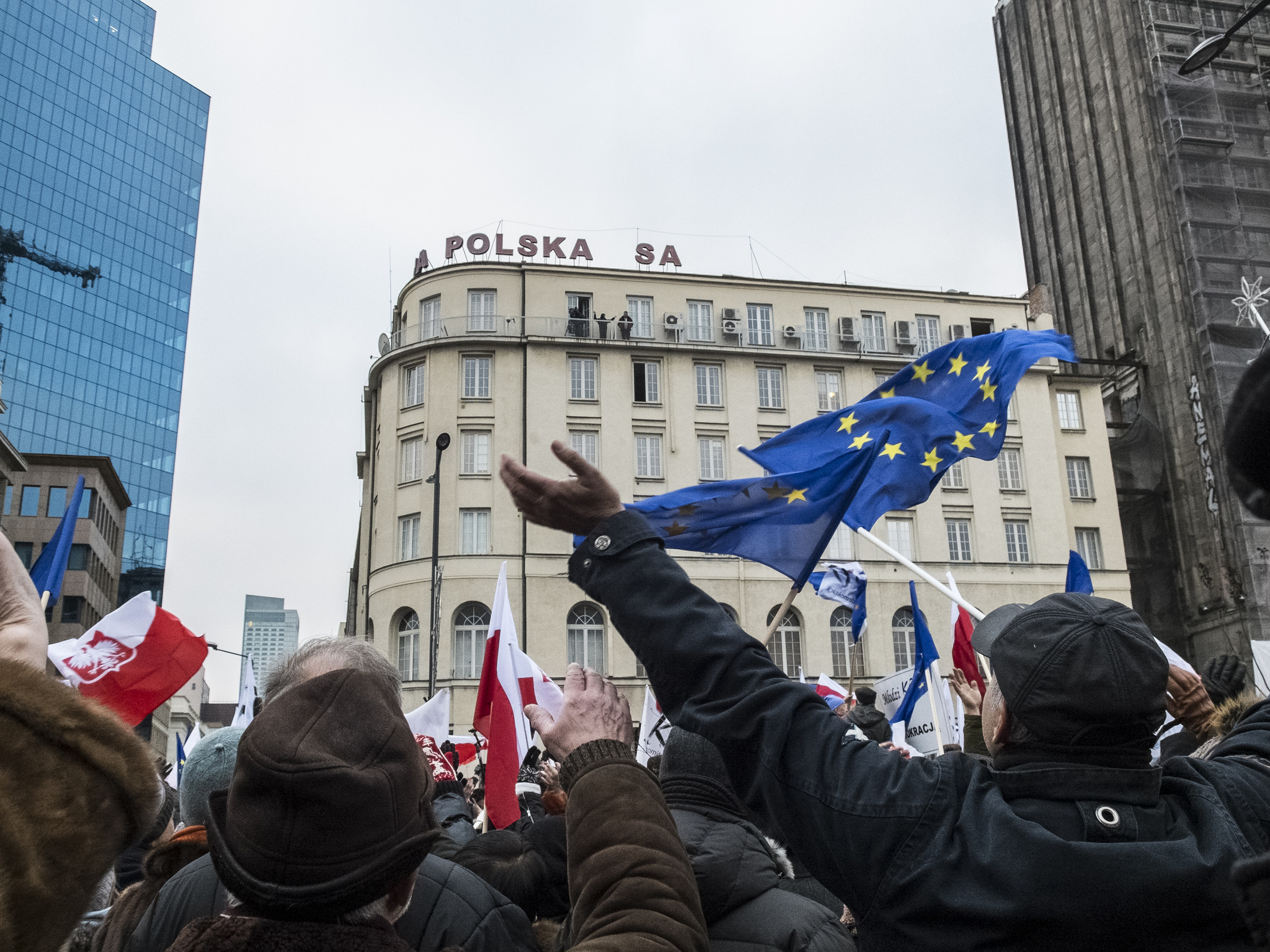 In the early 1990s, Poland went through one of the most far-reaching and, at times, traumatic media reform programs that the world has ever seen.

Formerly state-owned media enterprises were privatized with breathtaking speed. Legal and regulatory structures were changed to ensure freedom of expression, access to information, and a level playing field for all media. Public service media was created and overseen by an independent committee designed to protect it from political interference. Foreign investors flooded the market and set new standards for technology and journalistic practices. Poland traded one icon—an aging Communist-era industrial infrastructure of smokestacks and soot—for another—a modern news and information industry that rivaled and sometimes surpassed its European neighbors to the west.

Now all of that is in jeopardy.

The decision of the new Polish government to take direct control of state radio and television threatens the independent regulatory system that was painstakingly constructed after Poland ended one-party rule in 1989. Modeled on similar regimes in other European countries, the independent commission was responsible for hiring top staff and overseeing public media. As of last Friday, those responsibilities have been transferred to the treasury minister, and the government immediately signaled its plans to put political figures in the top positions. While the decision does not immediately affect privately owned media and are set to expire on June 30, observers in Poland are worried that it is but the first move in what could become a more widespread, Russia-like attempt to stifle independent voices. The government has already said that the temporary regulations will be replaced with permanent legislation after June 30.

The impact of this change reaches far beyond Poland.

For most of the period since the fall of the Berlin Wall and the collapse of the Soviet Union, Poland has stood as one of the few countries that defined successful, system-wide media reform. While Polish media faced all the problems that the rest of the industry confronts—changing business models, uncertainty caused by the fast spread of social media and the capture of media by powerful corporate interests—the Polish media system emerged from the post-Communist era with a diverse and innovative set of players who delivered a wide variety of news products through both traditional and digital platforms.

The success of Poland’s media reforms in the 1990s were an inspiration for many world-be reformers in other countries, and donors and media development professionals frequently turned to Polish journalists, editors, and owners to share their stories. As a World Bank official, I oversaw the production of a training video focused on the daily newspaper Rzeczpospolita, a former mouthpiece of Poland’s communist government, which successfully transformed itself into what became known as the “Polish Financial Times.” On the video, Rzeczpospolita journalists and editors describe the wrenching changes and personal sacrifices they went through, at one point being forced to sell copies of the newspaper on the street in lieu of salaries as the newspaper struggled to adjust to the end of government subsidies.

The worry now is that the moves made by Poland’s new government will not only end that media success story but are part of a larger plan to consolidate political control, and will lead to yet another illiberal or even authoritarian regime with veto powers inside the European Union.

Indeed, the Polish media debacle presents particular challenges for the European Union. EU officials in Brussels are increasingly worried about the decay of the core values at the heart of the European integration project.

Growing attacks on free expression on Europe’s periphery are nothing new. But the rot within the EU is especially disconcerting because of the impact it could have on the EU’s role as an advocate for media freedom and media development. Bojan Bugarič, a legal scholar at the University of Ljubljana wrote in a  recent report for the London School of Economics that the EU desperately needs new legal and political instruments to steer countries away from illiberal authoritarianism. Events in Hungary, where the media crackdown trend started gaining momentum three or four years ago, are  part of a pattern of attacks on democracy and the rule of law that are, he wrote, “reminiscent of the dramatic events in Europe’s most horrible century.”

Already last year, in Freedom House’s annual Freedom of the Press Index, six EU countries fell into the “partly free” category. That’s six countries that can block EU decisions and continue to stall the EU’s efforts to set standards for open information and independent media. If a large and powerful country like Poland joins with illiberal neighbors like Hungary, the Czech Republic, Romania and Bulgaria in forming an anti-freedom bloc in the EU, it will deeply undermine the EU’s ability to act on media freedom and democracy issues not only within the EU, but in its external relations polices towards countries such as Russia.

While some officials suggested that the EU could apply sanctions against Poland for passing a law that so blatantly contradicts EU standards, such a move seems unlikely. Hungary has already signaled that it would block any assertive EU response. Noting that EU sanctions require unanimity among the 28 EU members, Hungarian Prime Minister Viktor Orban vowed over the weekend to stand in solidarity with his new friend Poland.

Perhaps most worrying of all is the possibility that Poland’s move against the media signals, as it did in Hungary, a broader strategy to clamp down on other freedoms and actors in civil society. Getting control of the media is a tried and true method for consolidating power, shutting down opposition, and establishing authoritarian rule. Freedom House President Mark Lagon highlighted this concern in a statement after the Polish decision:  “The government’s taking of such radical steps in its first months and with little debate or expert input adds to concerns that its purpose is to increase power rather than strengthen rule of law.”

Over the coming year, we at CIMA plan to track the storm that seems to be gathering against independent media in the European theater. At a time when democracy is under threat not just outside the EU’s borders but within its very midst, the events in Poland should send shivers up the spine of Europe.

Mark Nelson is the Senior Director at the Center for International Media Assistance. He is a former journalist and development specialist who has written extensively on aid effectiveness, governance, and the role of media in development.

CIMA, in partnership with IREX, will be hosting a round table discussion on current issues facing media development in Europe, including in countries like Poland. Please join us on Wednesday January 13th at 10am EST for “Working Toward Better Media: Lessons Learned from Central and Southeast Europe.” Please RSVP here.