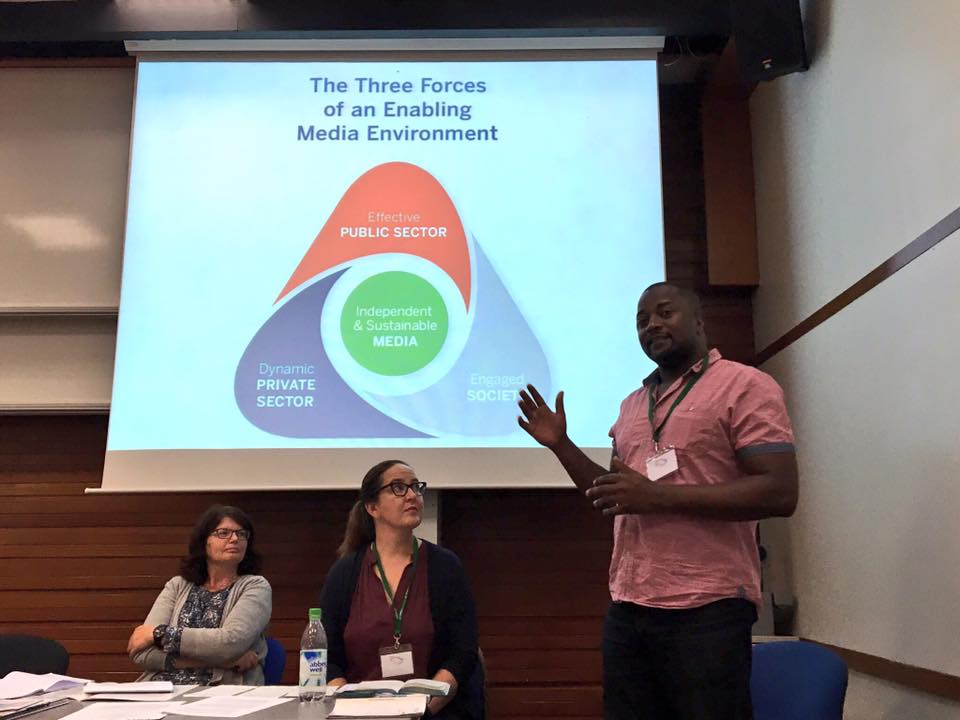 The workshop was held at the University of Westminster in London and was an official pre-conference event for the 2016 International Association of Media and Communication Researchers (IAMCR) conference in Leicester, UK. We were joined by over 60 academics from 22 countries on four continents, representing universities, research centers, and implementing organizations.

The consequence of such a dearth in intellectual focus on the field has contributed to a scattered approach to media development interventions, with too little attention to the institutional and governance questions that confront the media in developing countries.

It was with this in mind that CIMA, along with our partners at the Communication and Media Research Institute (CAMRI) at the University of Westminster in London, convened a day-long workshop with researchers from across the world to reconsider the intellectual underpinnings of the media development field. The workshop was held at the University of Westminster in London and was an official pre-conference event for the 2016 International Association of Media and Communication Researchers (IAMCR) conference in Leicester, UK. We were joined by over 60 academics from 22 countries on four continents, representing universities, research centers, and implementing organizations.

The goal of this workshop was to identify gaps in knowledge and discuss how to foster greater collaboration between scholars and practitioners. According to Martin Scott of the University of East Anglia, while there is plenty of research on media development, most of this work “doesn’t help to answer how to get from point A to point B, or to scrutinize the political economy of media development.” Indeed, there is plenty of scholarship explaining the challenges and obstacles facing efforts to improve media systems in developing countries, but the field needs more scholarship that focuses on how change happens in media systems, what can be done by external actors to stimulate positive change, and how it can be done more effectively.During the course of the day, participants engaged in conversations around three broad over-arching topics:

One key theme that emerged from the workshop is the lack of relevant data. Other fields of development, such as health, education, and the environment, have a wealth of data with which scholars are able to conduct research that helps practitioners formulate evidence-based approaches. True, a fundamental challenge for our field is that media systems are not easily measured. However, there are data that can help us understand the way in which people access news, who controls information flows, and the level of pluralism in a media system. Too much of this data, however, has not been mined sufficiently and some of the most valuable existing data sets are held by tech companies such as Facebook and Google, which have become hugely influential in information ecosystems across the world, and in particularly, in the global south.

Why don’t practitioners and researchers meet, get around the same table? Why isn’t this collaboration funded? – Sacha Meuter, Fondation Hirondelle

After the day-long meeting, there was a sense among many in attendance that there is real demand for better collaboration and communication between scholars and practitioners. For scholars, greater access to grassroots work could help enrich their research, and for practitioners, better awareness of recent scholarship could help root their approaches in evidence-based findings. However, there are some important challenges to greater engagement between scholars and practitioners that we must consider carefully:

The event showed strong commitment to building stronger connections between scholars and practitioners. We are exploring endeavors such as creating a media development researchers network, convening scholars to share research on a regular basis, raising the visibility of the media development field at important academic conferences, and providing opportunities for young scholars to learn from and contribute to the field.

The pre-conference workshop in London and our session at the IAMCR conference in Leicester made it clear that there is a hunger for more collaboration between scholars and academics. Both would benefit, and the field of media development would be better off for it.

If you are interested in staying updated on our initiative to build bridges between scholars and practitioners, please email us at cima@ned.org.