Reflections on the World Press Freedom Day 2015 Conference, “Journalism on the Offensive in Africa” 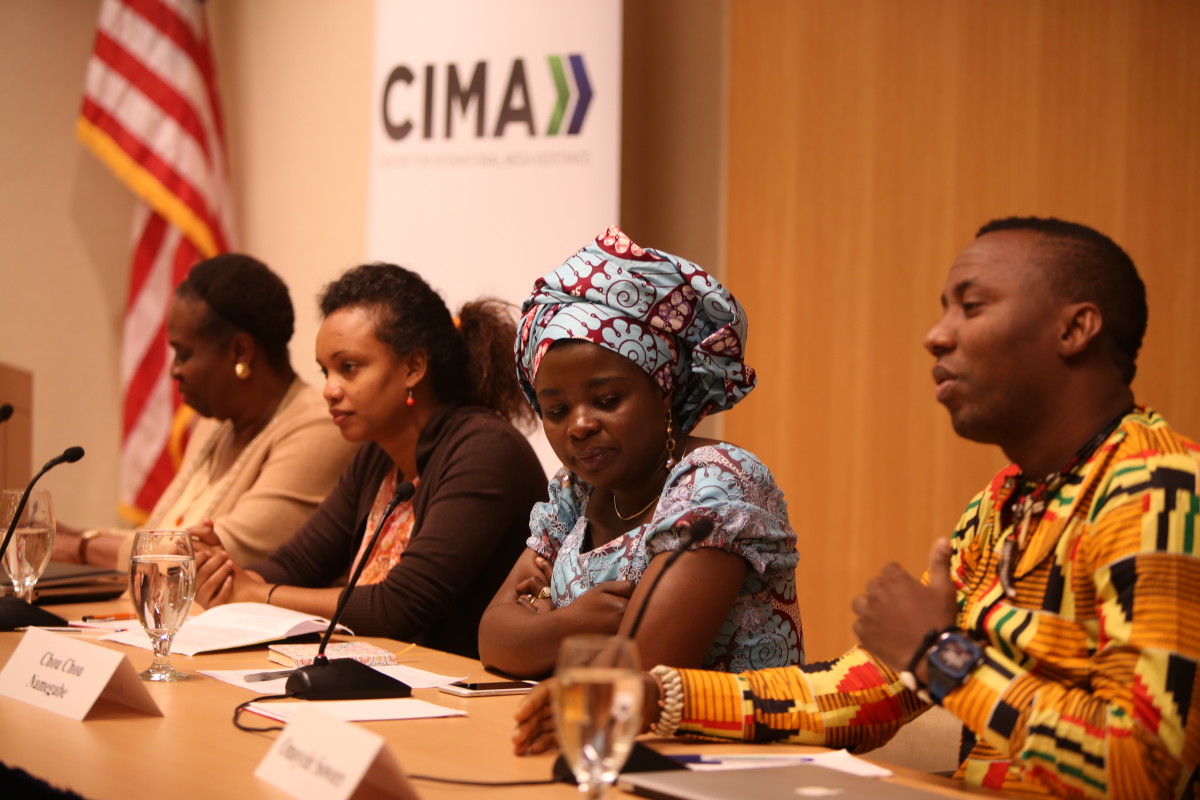 Last week’s WPFD conference posed a new narrative about press freedom in Africa.  Although the difficulties are formidable, the determination of African journalists to do their job, to write and talk about what they wish, to exercise their human right to freedom of expression, cannot be denied.  Whether it be the relatively closed media environments such as Ethiopia, Angola, Sudan and the Gambia; more open places such as Nigeria, South Africa, and Senegal; or the many contested terrains such as DRC, Kenya, Zimbabwe, Cameroon and Burundi; African journalists are pushing back against the attempts to muzzle them, and are pushing forward with innovative and sometimes quite powerful initiatives to inform citizens and empower them to make choices in their lives.  Freedom House has just released a report that found Africa to be the only region of the world where freedom of the press increased last year.

How Digital Media is Changing the Landscape in Africa

The conference heard from three panels.  The first focused on social media and revealed stark contrasts.  Simegnish “Lily” Mengesha, former director of the Ethiopian Environment Journalists Association, described the restrictive environment for journalists aided by repressive press laws and anti-terrorism legislation: Ethiopia is the number one jailer of journalists in Africa, fostering a major exodus of journalists, and leaving virtually no independent newspaper or radio station still operating in the country.  Internet penetration is also the lowest in Africa at two percent, and the only service provider in Ethiopia is controlled by the government.  Ethiopians get most of their news from social media, and this emerging technology has threatened the government, as the jailing of the Zone Nine bloggers suggests.  Despite the repression, the government may find it increasingly difficult to prevent on-line news from entering the country.

Chou Chou Namegabe from the Women’s Media Association of the Democratic Republic of the Congo spoke about the impact her organization has had in recruiting and training young female journalists, who have focused attention on the huge problem of violence against women in eastern DRC.  Radio remains the dominant source of news, but social media is beginning to catch on.  Women need training on how to make the best use of it.  Social media helped mobilize the resistance to the government’s efforts to modify the electoral law to require a census and delay elections.

Omoyele Sowore, the founder of Sahara Reporters, declared that social media had made a revolution during the Nigerian elections.  Nigeria has very high internet penetration, and with some 100 million cell phones, especially smart phones, nearly everyone has access.  Not only did Sahara Reporters get the news out about the results well before the electoral commission or the legacy media, but it had exposed fraudulent practices in a previous state-wide race, making it difficult for would-be riggers to repeat their deed in the general election.  Social media also spread peace messages, and helped Nigerians vent their passions on-line rather than in the streets, helping to reduce violence.  There is little the government can do to control social media.  Instead it has come to respect it, often submitting to interviews when asked.  The new president, Mohammadu Buhari, can expect the same media scrutiny as his predecessor.  Nigerians have taken a big step forward in seizing their destiny, and social media was an important tool.

In a video message, Wilf Mubanga of The Zimbabwean newspaper said practicing journalism in Zimbabwe is like walking blindfold in a minefield, but called on journalists to “push the boundaries.”  Likewise Rafael Marques, who is facing trial for defamation in Angola for his efforts to expose corruption and human rights abuses, said that the Internet is the last frontier for the control of information and that young people can be the tipping point for pushing the boundaries of freedom of information.

Determination of political elites to stay in power is main reason for decline in #pressfreedom, says @FreedomHouseDC‘s Africa Dir. #WPFD2015

The second panel on investigative journalism featured Sadio Kante, a Reuters news correspondent expelled last year from the Republic of the Congo and now based in Mali; Mekki Yousif Abdalla Elmograbi, chairman of the Sudanese Press Freedom Organization; Fatou Senghor of Article 19 in the Gambia; and Elie Smith, also expelled from Congo and now based in Cameroon.

The Role of the International Community

On the third panel of the day, Sue Valentine of the Committee to Protect Journalists proposed four lessons: “Do no harm,” i.e., let the local journalists take the lead; the political and economic environment go together; civil society and journalists should work together; and local journalists need international solidarity.

Vukasin Petrovic of Freedom House warned that freedom of the press has declined due to restrictive laws, physical threats, financial pressure, and open propaganda against the media.  The international community needs to make media freedom a greater priority, he appealed, including the use of trade agreements.

Sarah Pray of the Open Society Foundations emphasized the need for local ownership, working with what we have, and diplomatic pressure.  She suggested working with the African Court to get rid of bad media laws, and more consistent international messages defending press freedom, balancing development and security interests.

David Gilmour, deputy assistant secretary of state for African Affairs, asserted that strengthening democracy, including a free press, is the top priority of the US.  American ambassadors welcome journalists to their programs, hundreds of journalists have visited the US on official exchange visits, and the US has sponsored media training.  The US has recently intervened on behalf of journalists in Swaziland and Niger.

The day concluded with the screening of a film by a Kenyan NGO, InformAction, entitled “Guidebook to Impunity,” which indicted Kenya’s recent electoral process and the failure of the international Criminal Court to hold human rights violators accountable.  On President Obama’s upcoming visit to Kenya, Maina Kiai, the director of InformAction and the UN special rapporteur for Freedom of Assembly and Association, recommended that, in addition to President Kenyatta, Obama should meet with civil society groups to make the point that “criticism and dissent are necessary and useful.”

The following day participants in the conference joined the packed audience at an African policy breakfast hosted by Rep. Karen Bass of California.  In his introductory remarks, Rep. Steny Hoyer of Maryland praised the World Press Freedom Day event, underscoring the importance of press freedom for democracy.  On the panel, Omoyele Sowore again recounted the story of Sahara Reporters and the Nigerian elections, and called for African leaders to drop their excuses for repressing press freedom and extending their terms in office.  Chris Fromunyoh of NDI surveyed the many challenges presented by African elections, but argued that there is no good reason they should not be successful.  Kamissa Camara, senior program officer for West and Central Africa at NED, urged more engagement with the Africa Union and other African regional organizations, and more attention to youth.

The WPFD activities concluded with a roundtable of the African journalists and institutions providing support.  In the course of the discussion three programmatic themes emerged: