Regional Collaboration in Southern Africa: Solidarity in the Age of Fragmentation 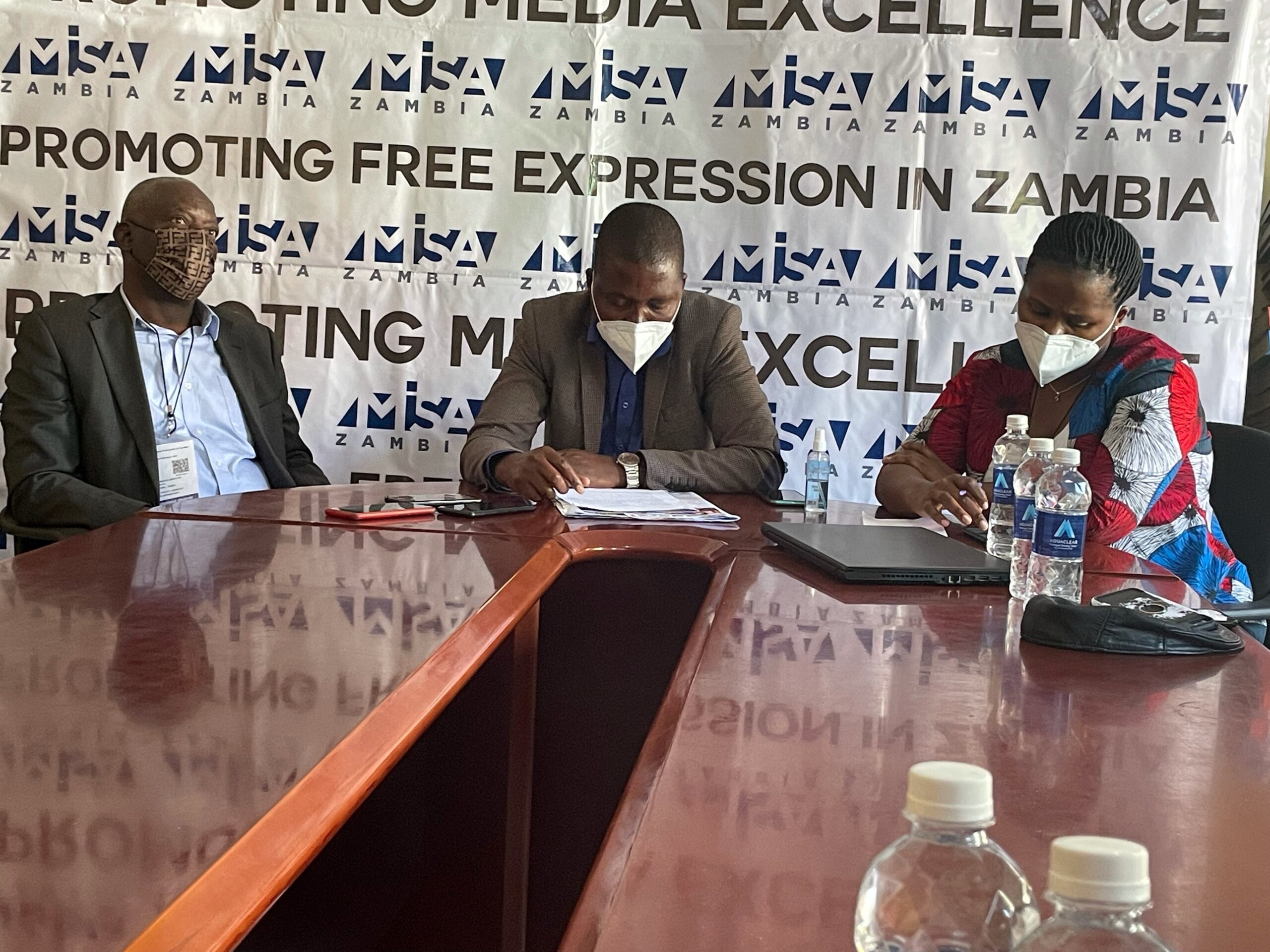 By the Media Institute of Southern Africa

The landmark Windhoek Declaration, signed in Namibia in 1991, signaled Southern Africa’s commitment to working in solidarity to support a free and independent media in the region. Thirty years later, independent journalism in many Southern African countries has declined. The COVID-19 pandemic has added to the challenges independent media are facing, with governments taking advantage of the crisis to crack down on journalism. The once-vibrant regional networks that allowed media advocates to stand strong in the face of repressive forces have lost influence, crumbling due to internal competition for resources, lack of consensus, and unequal power dynamics. Despite these setbacks, they have not given up hope.

Perhaps the best example of this enduring hope is the Media Institute of Southern Africa (MISA), which has been one of the biggest champions of cross-border collaboration in Southern Africa’s media sector since 1991. Set up as a network of independent country chapters that coordinated their activities through a centralized regional office, MISA was instrumental in setting joint priorities for regional cooperation. For example, they helped coordinate several successful campaigns for legislative change, such as the establishment of the African Platform on Access to Information.

However, MISA’s influence has waned in recent years. The closure of its regional secretariat in Namibia in 2015 diminished the organization’s ability to coordinate cross-national initiatives. Of its original 11 country chapters, eight remain in operation. The three branches that closed, Angola, Eswatini, and South Africa, continue to employ freelancers and volunteers to contribute to annual reports on the state of media in the region.

The fragmentation of MISA is not a unique phenomenon. As autocrats intensified their attacks on independent journalism, international financial support for media development dwindled at a time when it was badly needed. Funding cuts contributed to a climate of uncertainty and increased competition among organizations reliant on donor support. Increased competition for funding and resources led to media outlets and civil society organizations becoming more divided, and region-wide campaigns for media reform and press freedom faltered.

Despite these challenges, there is still a strong commitment to regional cooperation in Southern Africa. As Herman Wasserman points out in his report, The Untapped Potential of Regional Cooperation for Media Reform in Southern Africa, media advocates are enthusiastic about the prospect of a revived regional network. They stress that a decentralized and less bureaucratic approach would avoid the pitfalls of the past, and better enable them to articulate an African agenda for media development at global forums. Given this renewed momentum, it is critical that media experts and advocates rebuild solidarity across borders and create lasting collaborations in defence of freedom of expression and press freedom.

In the years following the closure of the regional office, MISA has taken the lessons of the past to heart and reevaluated its once-cumbersome structure. The regional office’s demise was inevitable: the competition and redundancies imposed by the centralized bureaucracy were inefficient and unsustainable. As international aid dwindled, MISA recognized the need to gain a competitive edge by becoming leaner, more agile, and making the best of local resources.

With this in mind, the network has taken steps to modernize its structure, and each country chapter is now responsible for a specialized thematic area of work. MISA Malawi, for example, is responsible for issues of journalist training, and MISA Zimbabwe takes the lead on digital rights. This encourages collaboration while taking advantage of each chapter’s unique strengths. Regular elections determine which chapter will take on the functions of the regional secretariat. In 2021, MISA Zimbabwe took on this coordinating role, taking over from MISA Zambia, which housed the secretariat since 2018. This new approach means that chapters are no longer as siloed as they once were. The closure of the regional office allowed for greater shared ownership of the vision and success of the network.

MISA has also made sustainability a priority, aiming to provide donors with more value for money. The network’s new structure, coupled with the expertise it has developed over its long history, has made it more attractive to donors. Cutting down on the mammoth bureaucracy and switching to shorter term employee contracts has made the network more cost effective. It also leverages its technical expertise to provide professional services to other civil society organizations, allowing it to build a reserve of unrestricted funds.

As part of this push for sustainability, MISA has also made efforts to expand its focus to issues beyond those affecting traditional legacy media. For instance, MISA is increasingly engaging on issues of internet governance, addressing new and emerging threats to free expression. Several African governments have passed or are considering cybersecurity legislation that restricts freedom of expression online, limits access to information, and expands their ability to monitor citizens’ online activity. Many have also deployed spyware against journalists and activists. To discuss solutions to these issues, MISA convened the Regional Multi-stakeholder Internet Governance Forum in Zimbabwe in June 2021. Stakeholders came together to discuss common issues that transcend borders, including recent efforts by African governments to stifle press freedom online through restrictive COVID-19 laws meant to combat mis- and disinformation.

Even as it has undergone significant structural changes, MISA continues to play a leading role in articulating a shared vision of Southern African media development. It is a member of several global and regional networks and uses those connections to make sure Southern African voices are represented in regional and global discussions. One notable example is MISA’s collaboration with UNESCO’s Regional Office for Southern Africa to coordinate the Africa Regional Forum at the 2020 World Press Freedom Day celebrations, which commemorated the 30th anniversary of the Windhoek Declaration. The Forum contributed to the Windhoek+ 30 Declaration, which articulates a renewed commitment to collective action to protect independent media and free expression.

MISA’s experience has underscored the need for stronger and more strategic cooperation between organizations working to safeguard independent media. MISA’s vision is based on a commitment to strong networks, rather than building strong institutions that can’t stand the test of time. Networks are stronger than the sum of their parts. They allow for a more responsive and demand-driven approach by enabling autonomous organizations to pool resources and capacities, respond to new threats as they emerge, and change tack quickly in the face of new threats or opportunities.

However, collaboration cannot be imposed by external actors. It must emerge from connections between allies on the ground, who are best positioned to identify shared needs, priorities, and opportunities for joint action. Instead of attempting to create networks or other collaborative structures from scratch, donors should support Southern African media advocates and civil society organizations by funding already existing networks and collaborative campaigns that are rooted in local demands.

MISA’s experience offers several lessons for advocacy organizations in Southern Africa aiming to advance independent media in the region through the establishment and maintenance of effective and efficient mechanisms for cooperation.

Creating a structure that encourages members to share their priorities and current projects and build consensus around shared goals generates organic opportunities for cross-border collaboration. The decentralized nature of such a network helps avoid the bureaucratization and competition that Wasserman identified as triggers for the initial downfall of collaborative networks in the region.

Though the rising tide of creeping authoritarianism has left its mark, press freedom advocates are undeterred. Southern Africa has a strong history of regional collaboration, which will serve it well going forward. Networks like MISA, and other regional partners like the Southern African Editors’ Forum, have a wealth of experience coordinating joint action to strengthen independent media in the region and continue to find new avenues for cross-border collaboration. One of the biggest lessons MISA has learned from the trials it has faced over the past three decades is that sustainability is key. Networks need to utilize their resources effectively while remaining adaptable and responsive to changing situations on the ground. In time, hopefully these recommendations can form the basis of a newly invigorated network for Southern African media development.