New report: The “dark side” of media development 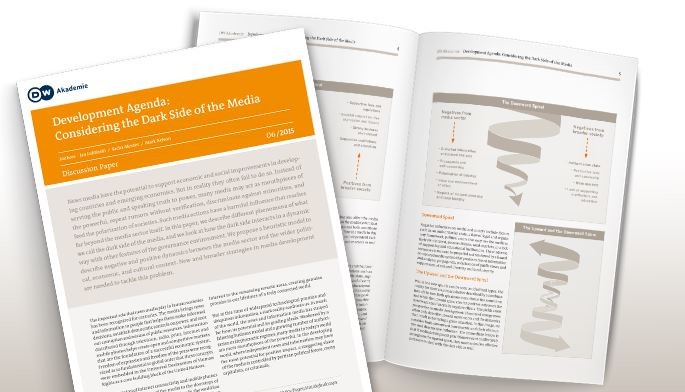 Deutsche Welle Akademie's new publication: "Considering the Dark Side of the Media"

Media development, as we define it at CIMA, encompasses more than interventions and investment by donors and implementers in the global media sphere—it refers to the evolution of media systems in and of themselves.

Taken in that vein, there is a “dark side” to media development, one that refers to the media’s control or manipulation by partisan political forces, crony capitalists, or criminals, and one that has devastating impact on society.

Distorted and biased information, propaganda, self-censorship, and exclusion of minority voices are only some of the features of the “dark side” of media, as discussed in the latest publication from Deutsche Welle Akademie, co-authored by Jan Lublinski of DWA, Sacha Meuter of Fondation Hirondelle, and CIMA’s own Mark Nelson.

The “dark side” phenomenon arises in several contexts, the authors argue, and they present five distinctive but related governance characteristics that provide an environment for the trend:

One major call to action in the paper is the lack of measurement of media systems globally. “Measuring all dimensions and the progression of the dark side phenomenon would require a much more ambitious effort at data collection than is currently underway,” the authors write. Citing IREX’s Media Sustainability Index, they suggest that the problem is “growing and spreading.”

At a time when international debates on the role of media and access to information in the global development agenda are reaching a tipping point, research and indicators will be essential to an understanding of media systems around the world.

In their recommendations to the media development community, the authors suggest that improvements can be made to the design of interventions, taking into consideration cultural and political contexts. They also call for better integration by development actors, who may not understand the nuances and “ecology” of media environments.

Overall, however, the current strategy for media development is not enough. As the authors write, “evidence strongly suggests that the dark side of the media needs to be treated as part of a broad approach to improved governance.” Perhaps this is the biggest takeaway for the media development community for the future.