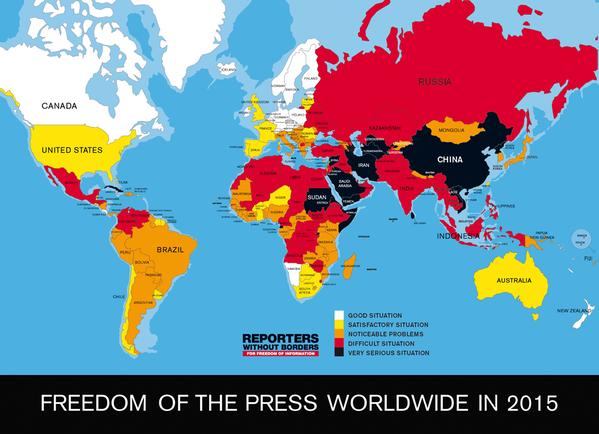 The latest analysis of the state of press freedom around the world paints a grim picture, as the Reporters Without Borders 2015 Press Freedom Index reports that two thirds of the 180 countries surveyed registered a decline.

RSF reported declines in every region of the world, but the European Union and Balkans saw the starkest change from 2014, with wide-ranging decline throughout a region that is typically a leader in world press freedom. In fact, EU countries range from first place to 106th on RSF’s index, which is an “unprecedented spread.” RSF questions the European Union’s model, attributing the challenges seen in the region to increased pressure on journalists and recent policies that may affect pluralism and freedom of information.

Though the EU’s erosion was perhaps one of the greatest surprises in this year’s index, the other major themes noted by RSF are global in their nature. The control of news and information in conflict zones by governments and non-state actors (such as in Ukraine and in Syria) have led to major disruption, and this “weaponization” of news poses significant threats for stability both of the media and society as a whole. Censorship because of religious issues and reasons of “national security” were also seen throughout the world this year.

We will be following whether these major trends, and themes highlighted by RSF will emerge in the other major press freedom index, compiled by Freedom House, scheduled for release later this year.

At RSF’s stateside launch of its index Wednesday, USA Director Delphine Halgand interviewed Ali Rezaian, the brother of Washington Post correspondent Jason Rezaian, who has been detained without charges in Iran since July 22, 2014, and exiled Pakistani journalist Raza Rumi.

Jason Rezaian has been jailed in Iran longer than any other western journalist. Ali Rezaian said their mother had been able to visit Jason in prison just twice during a three-week stay in Tehran and reported that “he has lost so much weight … he’s been in distress.” He has been suffering from health problems and has been denied access to a lawyer. Earlier in his captivity, Jason would be “interrogated for seven to ten hours a day, five days a week,” Ali said.

Asked what message he might have for the Iranian authorities, Ali said he would urge them to “please look at the evidence. Clearly this is a mistake … he has no affiliation with the U.S. government.”

Rumi said that despite a “huge opening of Pakistani media” in recent years, there have been severe constraints on journalists, mostly in the country’s conflict zones. Pakistan remains one of the world’s most dangerous countries for journalists, with at least 18 killed in the past three years, RSF reported. These killings go unpunished because witnesses are afraid to testify in court, which contributes to a “culture of impunity here,” Rumi said.