How Romania’s independent media woke up its readers 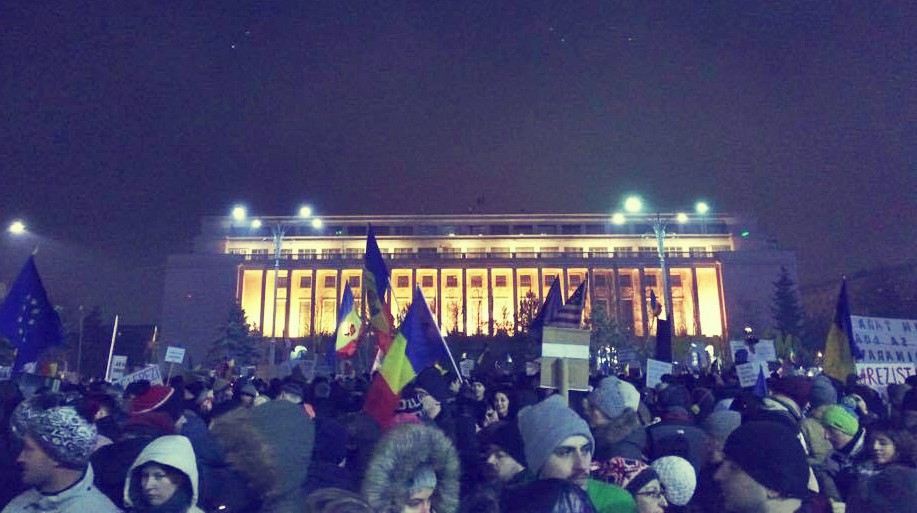 Photo of protests in Bucharest courtesy of Marius Stan.

As January came to a close, Romania’s government met late at night on the last day of the month to approve an emergency ordinance that decriminalized cases of official misconduct, or simply put: corruption. In the weeks leading up to this, a few members of the Romanian independent media heard whispers from government sources about the possible law change and tried to inform the public as the government kept quiet before its meeting. Out in front of this story was Dan Tapalaga, an investigative journalist and site editor of one of the most popular online news outlets in Romania, “HotNews,” who warned his fellow citizens weeks in advance of what was to come.

The new law decriminalized government official malpractice cases involving less than 200,000 lei (nearly US$48,000). While that may not seem like a lot of money, it is important to remember that Romania is in one of the European Union’s poorest countries where the average citizen’s salary is only about $6,200 per year. News of this legal change, which would significantly benefit the ruling party, provoked massive protests on a scale that haven’t been seen recently in Romania. This leads some observers to wonder if it represents the first signs of a democratic reawakening in the country.

Changes to the ordinance directly benefited members of the Social Democratic Party (PSD). The party’s leader, Liviu Dragnea, was convicted of electoral voter fraud in 2015, and others in the party have been convicted of numerous different corruption and abuse of power cases in recent years as Romania attempted to crack down on crime and bribery in the government. In spite of seemingly endemic corruption, the PSD handily won the legislative election at the end of 2016 and installed a proxy, Sorin Grindeanu, as Prime Minister since Dragnea cannot currently serve because of his convictions.

News reports by independent media in the days leading up to the vote on January 31 were what first sparked large protests which quickly grew to include hundreds of thousands as Romanian citizens took the streets of Bucharest in the week following the ordinance announcement.

A few days later, Grindeanu declared that the government would repeal the ordinance. The government announced the repeal on February 5, but people are still protesting because there is concern that the government is still trying to pass a similar law again while many are also calling for resignations and early elections.

It appears the Romanian people’s passionate response surprised the government. “I don’t want to divide Romania,” Grindeanu said. “Romania at this moment, seems broken in two.”

HotNews, as one of leading independent media outlets in Romania, quickly reached out to sources within the government when rumors of the ordinance were first floating around. When I spoke with Tapalaga last week, he explained that given Dragnea’s convictions and other pending cases, he and his fellow journalists at HotNews knew that manipulating the justice system was going to be a priority for the PSD, which had just recently taken power in the election.

“Having this in mind, we were keeping an eye on the justice department, seeing what they were doing,” Tapalaga said. “We had a lot of sources inside the government, inside the system, that smelled a small group of people from the PSD preparing to change the penal code. They said they are writing a law, a pardon law.”

On Friday, January 13, Tapalaga published his first of many stories on the issue in which he warned the public of what was about to play out in the following weeks.

“After three days I got more information and on Tuesday I announced that the government is going to adopt an emergency ordinance in order to enforce those laws,” said Tapalaga. “The only chance to stop the emergency ordinance is to convince President Iohannis to go to the government and convince them to quit, to drop any emergency ordinance, and he did that. Very shortly, that’s the way it all started. And now we have tens of thousands of people going out into the streets protesting against this emergency ordinance. And what made people angry was the way they wrote the new law. They did that far away from public eyes, in secret, hiding something, because obviously they didn’t want the public to find out that they are just writing laws for themselves.”

Despite the bad press and President Iohannis’ opposition, which included  literally joining the marchers on the streets of Bucharest, the parliament continued by passing the ordinance before its repeal. Now, there are countless questions facing Romania’s government. Tapalaga admitted to being worried about numerous problems besides the ordinance itself, such as if the Romanian public would continue caring about the abuses of power in government.  Was this a short-lived explosion of civic anger or will it endure?

For a country with three straight general elections that had less than 40 percent voter turnout, questions relating to apathy in a new democracy are real. The immediate repeal in response to the many protests though clearly shows the power of mass mobilization and it appears if the Romanian people continue to demand change, they can achieve it.

“[The PSD] thinks people will forgive them for what they are doing now but I’m afraid they won’t stop even if the press will continue to criticize them,” Tapalaga emphasized that there are only a few websites criticizing the PSD. “Now we are afraid, a little bit, that there could be attempts to intimidate HotNews. It wouldn’t have been the first time. We’re already receiving anonymous phone calls of people saying they’ll fire our newsroom but this has been quite common in the last year.”

Still, HotNews will continue to push forward, Tapalaga said. “We are in a way trained, we get used to that.”