Caught between the East and West: The “Media War” intensifies in Serbia and Montenegro 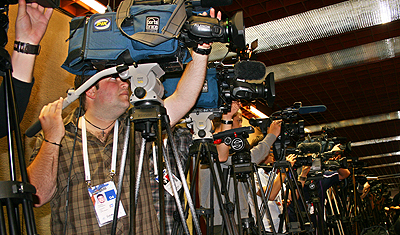 Videographers in the Sava Centar in New Belgrade. Photo by Pål Nordseth and licensed via Creative Commons (CC BY 2.0).

As EU and U.S. assistance to independent media in Serbia and Montenegro declines, Russians are seizing the opportunity to support and promote pro-Russian media, broadcasting news in the local language, and investing in media development in the western Balkans. This turn of events bears watching by the international media development community and advocates for free and independent media.

At a meeting of EU foreign ministers in 2015, one of the hotly debated topics was Russia’s increasing influence on the countries that were formerly part of the Soviet Bloc, influence that is now especially aggressive in the media sphere. The chief conclusion of the meeting was that “extraordinary measures” have to be taken for the EU to counter Russia’s “active propaganda campaign,” and Federica Mogherini, the EU’s high representative for foreign affairs and security policy, was tasked with forming a “counter propaganda team.”

But it is becoming increasingly obvious that the new measures will focus primarily on the countries with large Russian-speaking populations that are part of the EU, such as the Baltic states, or the countries that Europe perceives as important, such as Ukraine. Parts of the western Balkans, which only recently emerged from ethnic wars and have yet to fully embrace democratic political processes—including creating stable, independent media institutions—are left to fend for themselves.  Due to historic ties, steady influence of the Christian-Orthodox Church, and the NATO bombing of the former Yugoslavia in the 1990s, citizens of the republics of Serbia and Montenegro are deeply divided over the relationships with the West and Russia, making it a welcoming ground for business, policies, and the messaging coming from Moscow.

Caught between the East and the West

Since the end of wars in former Yugoslavia, both countries define their foreign policy priorities in terms of the alliance with the European Union and, in the case of Montenegro, toward membership in NATO.  Not surprisingly, a number of senior Russian officials have openly opposed Montenegro’s entry into NATO. Acknowledging the current political situation, U.S. Secretary of State John Kerry said that together with Serbia, Macedonia, and some other countries, Montenegro is in “the line of fire” between the U.S. and Russia.

Although Western media such as CNN, BBC, Radio Free Europe, and Voice of America are present in the region, media liberties are shrinking, and professional standards are at historic lows. The highly fractured commercial market for media makes it vulnerable to capture by outside influences. Due to the shift in donor interests and lack of funding, the influence of the EU and American media development organizations is diminishing, leaving the void in the media sphere to be filed with reporting coming from Moscow.

Russian efforts to strengthen ties with the “brotherly nations” of Serbia and Montenegro, to use the phrase often heard from Moscow, is not restricted to the economy. By the end of 2014, with its slogan “Sputnik Tells the Untold,” Moscow launched Sputnik, a news portal in the Serbian language –shared by Montenegrins and Serbs–available on radio stations and streaming on the Web. It provides news content, analysis, and opinions.

Examples of the analysis include arguments supporting the idea that the Malaysia Airlines flight that went down in Ukraine was targeted by a Ukrainian missile system; and an article explaining that the G-7 sanctions on Russia are not related to the conflict in Ukraine but to the fact that Russia is currently one of the world’s “strongest economies.” Although Sputnik is registered as a local organization, in order to get any information about its operations written questions have to be submitted up front, and its headquarters in Moscow must approve the conversation. With its modern design and a staff of journalists who used to work for independent media, Sputnik is treated by many Serbian media as a trusted source of information and its content is uncritically shared by Serbian media.

The number of media outlets registered locally and supported with Russian capital In Serbia and Montenegro is increasing, as is Russian-sponsored content appearing in the local press. With its 300 pages and printed in full color on glossy paper, the magazine Russia Danas (Russia Today) has a mission to “create a positive image of modern Russia.”

Russian media style is appealing in the Balkans

Zoran Stanojevic, editor at Serbian National Television and a veteran journalist is of the opinion that Russian media is popular in the region not so much because of the content, but because of the style.  According to Stanojevic, Western media  are often too politically correct, leaving the impression that there is more to be told about a certain story, whereas Russian media are more direct, which Serbian viewers prefer. He also noted that Western media almost never report positively about Russian politics and Serbian viewers perceive that as bias.

According to Elena Popovic, secretary and general counsel of the Media Development Investment Fund, media in Serbia are so underfunded that they cannot afford to pay for content from news agencies such as Reuters and have to look to Russian and Chinese sources, as they are generally free of charge.

In Montenegro, Russians run several radio stations that cover practically all the coast and the big cities. They have established Russian-language schools and are engaged in NGO development, providing economic and technical support to organizations that oppose Montenegro’s plans to join NATO. Their biggest radio station, More, advertises its services in both languages and brands itself as the place to explain Montenegro to Russians and vice versa.

Russia Today is recruiting media workers for its Serbian language service. Russian money supplements the revenues of some Serbian and Montenegrin media that for years have advocated for Russia.

Russian Soft Power on the Rise in the Region

Russia’s penetration of the media space, not only of Serbia and Montenegro but also in other countries, is not unexpected, according to Predrag Simic, professor of political science at the University of Belgrade.  “I believe that this is a logical move for a country that wants to be a global power and to demonstrate its global power, to be a rival to the United States. This is what people do today. This is the so-called ‘soft power,’ or what the Americans call the power of the media,” Simic says.

Some measurable results of Russia’s orchestrated efforts to influence the media sector in the western Balkans are that more than half of the Serbian population now perceives Russia favorably, while only one-third is in favor of the EU. There is also a drop in support for EU membership and a steady negative perception of NATO, culminating in the refusal by Serbia to take part in EU sanctions against Russia. Although Montenegro was officially invited to join NATO in December 2015, its people are bitterly divided about that, with a 2015 poll showing 36.5 percent of the population to be in favor of it, 36.20 percent against it, and 27.3 percent of Montenegrins saying they would not vote either way.

The “Media War” Continues in Serbia and Montenegro

Serbs and Montenegrins are aware of the “media war” between the EU and Russia, though in their perception, forged by the local media, this is not a war for freedom of information but rather a battle between East and West.

However, perhaps the most troubling effects of Russian style journalism will be on local media in Serbia and Montenegro as it legitimizes state-controlled information and “patriotic reporting.”  Much like in the Russian media’s portrayal of President Vladimir Putin, Serbia’s prime minister is increasingly portrayed as a larger than life figure. The media report that he is the first to come to work, and the last to leave, that he cares for the country’s progress so much that he is not taking summer vacation.

Media influenced by Russia contribute to a fragmented picture of the world in which news is tailored for Russian political and economic interests, and the people of Serbia and Montenegro are left with increasingly unreliable information.

Marija Šajkaš is a U.S. correspondent for a Serbian weekly Novi Magazin. She has 25 years of experience working as a reporter, editor, and media consultant. Milka Tadić Mijović is a journalist, media executive, and was civic activist during the turbulent transition era in the Southeast Europe. She is one of the co-founders of the weekly Monitor, the first Montenegrin private and independent weekly magazine.