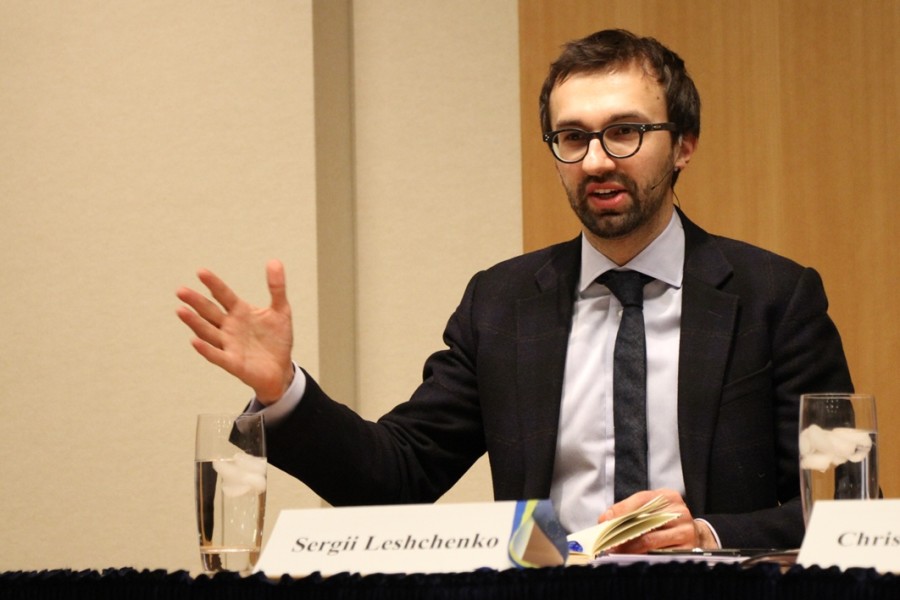 Sergii Leshchenko speaks about lessons learned from the Orange Revolution during a presentation at the National Endowment for Democracy in February 2014.

Guest post by Marlena Papavaritis of the National Endowment for Democracy, on why investigative journalism matters to the future of Ukraine

Long before the Euromaidan protests erupted over Ukrainian citizens’ frustrations with corrupt and unaccountable political leaders, ties between politicians and oligarchs and tracing the money trails left behind by political elites to their domestic business interests and investments abroad.

ong before the Euromaidan protests erupted over Ukrainian citizens’ frustrations with corrupt and unaccountable political leaders, Sergii Leshchenko was investigating ties between politicians and oligarchs and tracing the money trails left behind by political elites to their domestic business interests and investments abroad.

One of Ukraine’s most celebrated anti-corruption investigative journalists and press freedom activists, Leshchenko was selected as one of Reporters Without Borders’ “100 Information Heroes” for World Press Freedom Day 2014. This new and timely initiative aims to profile some of the world’s most courageous and dedicated journalists, many of whom operate in increasingly hostile and restrictive media environments.

Since returning to Kiev in February of this year,  Leshchenko has in effect returned to a different country facing a whole new set of domestic and geopolitical issues. Russia’s annexation of Crimea and the subsequent crisis in eastern Ukraine has presented a huge challenge for the new and untested Ukrainian government.Leshchenko’s selection as an Information Hero is well-deserved given his many years as an investigative journalist with Ukrainska Pravda, Ukraine’s leading independent online newspaper, founded by the late journalist Georgiy Gongadze. Since joining the  newspaper in 2000, Leshchenko has carried on Gongadze’s legacy by demonstrating an unwavering commitment to press freedom— whether during the chaotic and repressive presidency of Viktor Yanukovych or in the context of a post-Orange Revolution Ukraine.

As a Reagan-Fascell Democracy Fellow at the National Endowment for Democracy (NED) during the fall of 2013, Leshschenko continued to shine a light on Ukraine’s rapidly deteriorating press freedom landscape and decried the Yanukovych government’s heavy-handed tactics used to muzzle opposition voices. In a presentation he gave at NED based on his fellowship research, he emphasized the need for civil society—and independent media in particular—to remain engaged in the political process and to monitor and scrutinize public officials.

Perhaps more widely overlooked is the threat that Russia’s expansionism poses to democratic institutions in Ukraine, such as its media. It is increasingly the case that separatist, pro-Russian forces are unleashing violence against media outlets that do not espouse a separatist line. This “all-out information war,” as the Washington Post calls it, captures Putin’s obsession with shaping and controlling the narrative that is playing out on the ground, and reinforces the importance of standing with Ukraine’s independent journalists.

Those championing the cause of media freedom and access to information, such as Sergii Leshchenko and countless others, play an important role in times of political upheaval. Democracies and non-governmental organizations must remain supportive of the changemakers on the ground. If Ukraine’s latest revolution is to succeed and root out deep-seated corruption, it will depend on increased transparency guaranteed by dedicated investigative journalists. They are worthy of our support.

Marlena Papavaritis is a Program Assistant at the National Endowment for Democracy. You can find her on Twitter @MarlenaPapa24.