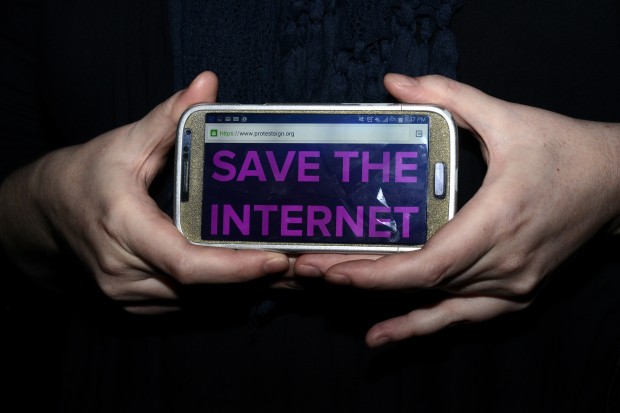 The focal point for the net neutrality argument this month was in the United States, where a debate over jurisdiction and limitations of these principles was addressed by the Federal Communications Commission. Photo by Stephen Melkisethian.

Net neutrality = the principle that Internet service providers should enable access to all content and applications regardless of the source and without favoring or blocking particular products or websites.

It’s a basic definition, yet one people often find hard to grasp. And it’s not something you really notice until it affects you in some way­—and more people could be affected, starting very soon.

The focal point for the net neutrality argument this month was in the United States, where a debate over jurisdiction and limitations of these principles was addressed by the Federal Communications Commission. The argument has stemmed from ISPs such as Verizon and Comcast, who endorsed a plan to create “fast” lanes for content online for increased prices—which Internet-based companies like Google and Netflix have spoken out against.

In a rare move, the FCC’s Chairman Tom Wheeler released the draft proposal for net neutrality rules in the United States ahead of the FCC’s open meeting on February 26, when a vote is slated.

According to the FCC, the new rules “to protect an open Internet” would include bright line rules (no blocking, no throttling, no paid prioritization), create a standard for future conduct, include measures for greater transparency, and allow broadband providers “reasonable network management,” meaning flexibility in providing services on technical levels.

The FCC received nearly 4 million comments on its original considerations on net neutrality early last year, which raised the possibility of “fast” and “slow” lanes for the Internet. Last year was, in effect, the year of net neutrality for the FCC, with the solicitation of public comments and its series of Open Internet Roundtables providing unprecedented access and response to the debate.

As with most technological shifts, there is a steep learning curve here. The debate really hinges on a lack of historical precedent, and so many are looking at how to apply previous principles to emerging technology. Thus, the push to reclassify the Internet as a public utility (technically common carrier rules), a move the Obama administration advocated in 2014. The new proposal would fall under Title II of the Communications Act (originally enacted in 1934), and Section 706 of the Telecommunications Act of 1996.

Wheeler’s op-ed on Wired, released Wednesday, reiterates the FCC’s authority in updating its rules to “reflect changes in technology and marketplace behavior in a way that protects consumers,” and claims that the proposal will modernize existing communications acts in the United States, “tailoring it for the 21st century.”

He also reminded the world that the Internet owes the nature of its emergence to the FCC, if incidentally. In the 1960s, the regulatory body made open access for network equipment a requirement (which was later used by companies like AOL to use modems for access to open telephone networks).

Opponents to this net neutrality proposal have argued many things:that increasing regulation will mean stifling innovation, or that it simply pits Internet companies versus Internet carriers—but Wheeler argues the opposite, saying there is a “fundamental problem with allowing networks to act as gatekeepers.”

“The Internet must be fast, fair and open,” Wheeler said. “That is the principle that has enabled the Internet to become an unprecedented platform for innovation and human expression.”

As the Internet becomes more commonplace for sharing information, with enormous economic potential around the world, the outcome of this proposal in the United States could set an important—if informal—precedent for international regulation of the Internet.

As Internet penetration inevitably expands around the world, this argument will continue. Unfortunately, in a lot of places, the fight for net neutrality might be too late: The cost barrier to access has countries prioritizing just getting online over how content is treated.

Thoughts for those who either have or will face this same debate: How will the Internet be structured; how will content be delivered? As technology writer Alex Howard noted, many other countries have set their own standards—Chile was the first in 2010, the European Parliament weighed in in 2014, and Brazil’s Internet Bill of Rights declaration of 2014, to name a few.

“The FCC’s move will be felt far beyond U.S. borders,” Access Now senior policy counsel Peter Micek said in a press release yesterday. “Advocates around the world—from Argentina to Turkey to South Korea to the European Union—are fighting for many of the same protections as those being proposed by Wheeler. Global policymakers can now look to the U.S. for clues as to what will help protect all internet users—whether on fixed or mobile connections—from online discrimination.”