In Vietnam, Digital is Democratizing 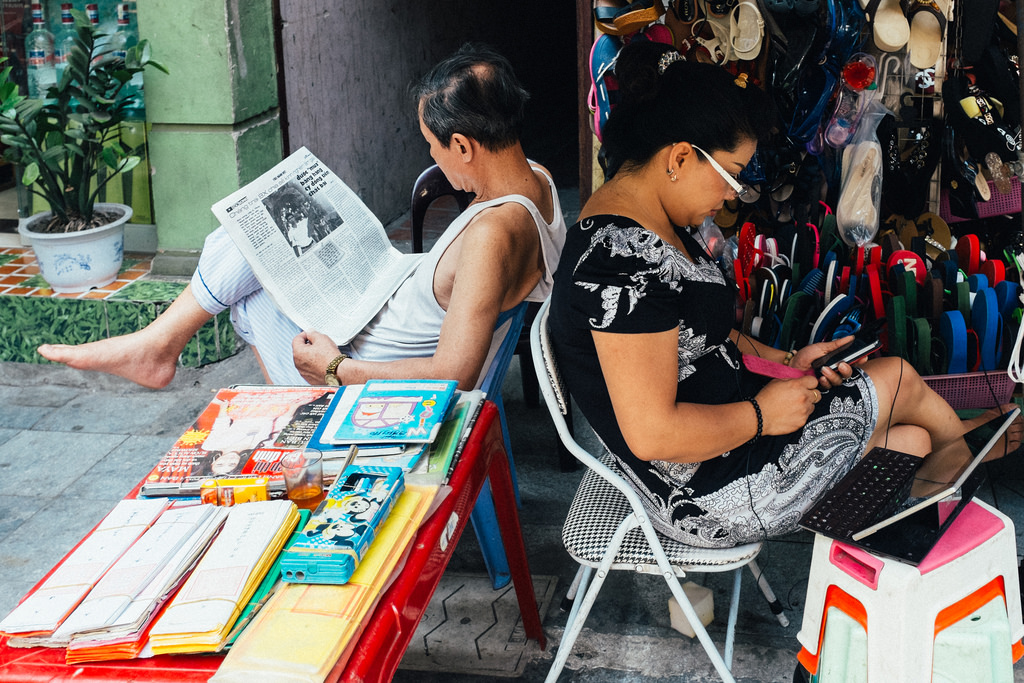 Vietnam has long been a place where media and newspapers are under strict control both by the government as well as the propaganda departments of the communist party. Although the country has more than 850 newspapers and magazines, the homogeneity in terms of news content is striking. One reason for this is that only journalists licensed by the government are permitted to write and publish news. Thus, diversity and plurality of viewpoints is systematically discouraged. The propaganda apparatus works to ensure that all news organizations are “under direction”—meaning that official media channels will not cover news deemed hostile to the regime. But the need for foreign capital and commitments to international trade deals have put Vietnam on the path to irreversible change—opening up its Internet infrastructure, and in turn, shaking up the communication landscape.

The Digital Explosion in Vietnam

The telecommunication infrastructure in the Southeast Asian country has transformed rapidly over the past decade. The number of fixed-line Internet subscribers has doubled to more than 8.2 million within the past four years. The broadband subscription rate has reached 37% following the launch of fiber optic service in 2013.

Perhaps more importantly, in the new digital age the suppliers of news—journalists—and the consumers of news—readers—have now become one. Everybody with a smartphone or an Internet-connected laptop can read, write, comment, and start influencing others in their social networks. According to the Vietnam Internet Network Information Center (VNNIC), the national Internet registry, Vietnam has approximately 46 million Internet users, which is equivalent to half of the population.

The Decline of the Information Gatekeepers

The recent emergence of popular, independent writers, who utilize personal blogs and social media, has turned into a wave of increasingly influential micro-pages attached to social media systems. Facebook, which was officially banned in Vietnam two years ago, is now the most popular platform for citizens to access a wide range of information and voice opinions. It has the most users in Vietnam, accounting for more than 75% of all Internet users. Some government officials have also opened Facebook accounts to announce programs or introduce new regulations. Many YouTube channels are even populated with anti-state content.

Now journalists have to visit these Facebook fan pages and blogs (WordPress, Blogger, etc.) for insights into everything from bringing to light misconduct by traffic police to exposing immense hidden assets owned by a local government official in poor provinces. State media outlets are motivated by competition for readership as well as for favor with the higher leadership. However, the deeply-ingrained bureaucracy and political intransigence holds the government back from satisfying the public desire for news on important topics like human rights, religious freedom, press freedom, and political liberalization.

The Vietnamese are no longer hesitant to debate political issues and topics previously regarded as taboo or politically incorrect. News is increasingly spread in real-time, with the spotlight being shed on activities of government leaders, foreign affairs between Vietnam and influential powers like China and the US, among other sensitive issues. Given (i) the massive volume of data, (ii) the speed of news reporting, (iii) inefficient firewall technology, and (iv) the lack of staff to monitor and control information flow, the Vietnamese censorship authority has failed to cope with the ever-rising public demand for transparency.

Social Media as a Tool to Shine a Spotlight

For a country with a strong Confucian tradition like Vietnam—where the idea of unequal relationships among people had been taken for granted for thousands of years—the new awareness and discussion of a democratic society has a far-reaching effect on almost every aspect of today’s sociocultural and political life. Politicians may soon realize that ignoring the population’s concerns will not work and may potentially even fuel hysteria and lead to higher chances of policy failure.

Some recent events could illustrate the gap between what the government wants to convey and what the public wants from the government. The most prominent case is the mishandling of the country’s biggest environmental disaster, which was caused by a Taiwanese owned steel plant in central Vietnam. In June 2016, Formosa Ha Tinh Steel admitted to having discharged toxic waste that destroyed marine lives along a 200-kilometer stretch of coastline, affecting millions of people. The government was slow in releasing official reports on the cause of the massive fish deaths and in requesting the culprit to make proper compensation. Such delay angered people, especially fishermen affected by the disaster, leaving them with no other channel but non-official media outlets to air their grievances. The conflict therein lies in the government’s willingness to protect a multibillion-dollar foreign investor over the livelihood of Vietnamese people. The failure of state media to cover public indignation against Formosa has created room for non-governmental media channels to reach an unprecedented level of impact and exposure.

Another case that reiterated this point is the incident where three local government leaders in the northern province of Yen Bai were gunned down in their office in mid-August this year–the first shooting of its kind in Vietnam. State media was slow to publicize the case and later contradicted itself in various reports. Meanwhile social networks exploded with large discussions and speculations about internal party conflicts and possible corruption at the locality, hurting the central government’s credibility.

Social networks, especially Facebook, helped show the world how warmly tens of millions of Vietnamese greeted US President Barack Obama when he visited Vietnam in May. Obama received millions of Facebook likes and shares, which was a sharp contrast to a visit paid by Chinese President Xi Jinping just five months earlier. The public seems to have found ways of expressing their political attitudes and getting more involved in shaping the country’s future course of diplomatic relations

When Vietnam laid the first infrastructure foundation for the Internet in 1997, the state had not foreseen the impacts of the free flow social networks, which are strong enough to overshadow the role of censorship authorities. Given that technological innovations will further speed up the rate of information access and disrupt the modus operandi of Vietnamese media system, individual users will gain ever more power to challenge large media institutions. The writing isn’t just on the wall for state-controlled media; it’s on every screen.

Pham Muoi Nguyen is a former journalist for the Wall Street Journal/Dow Jones Newswires (between 1999 and 2014), and currently runs a media monitoring and market research firm in Hanoi.