When Hate Goes Viral: The Danger of Social Media in Bangladesh 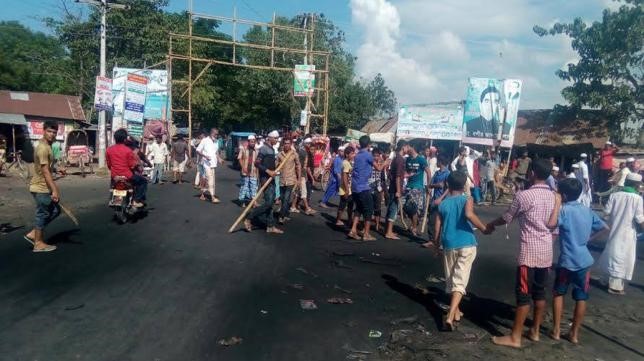 Last November, a group of Bangladeshi Muslims attacked a Hindu neighborhood in the Eastern part of Bangladesh. Thousands of people ransacked the temples and homes of Hindu families.  Attacks such as these on minorities are not a new thing in Bangladesh, but this particular incident had a relatively new feature: the use of social media to incite religious violence.

I began my journalism career in 2000 as traditional a print and broadcast journalist. However, in 2013, I began blogging and I also started using Facebook to share my views and opinions. Since then I have successfully used these new media platforms to reach a wide audience. Right now, I have more than 100,000 followers on Facebook, which has given me a strong platform for my own activism. My posts have enough traction to draw public attention quickly. And while social media created a new sphere of activism for me and many others, it has also become a scary tool. Because of my Journalism I have been targeted by extremist groups (the threat was published on Facebook) and forced to flee my country.  In this post I will focus on last November’s attack to show how social media is being used by some to incite violence and hate.

Rasraj Dash was a young Hindu fisherman with a Facebook account. Last October, he was fishing in a lake near his home when, allegedly unbeknownst to him, an inflammatory image was posted to his Facebook page. It was an image of the Hindu God Shiva at a Muslim holy site in the city of Mecca in Saudi Arabia – one of Islam’s holiest sites.

After authorities were notified the next day, Dash was arrested under the ICT Act, charged with uploading the controversial image on Facebook and sent to jail. During this time, an Islamic group organized a large protest rally. Participants demanded this young Hindu be punished to death because his Facebook post was offensive and insulted Islam. Following that protest, hundreds of Muslims entered the neighborhood where Dash lived to vandalize and loot 100 Hindu homes and 15 temples.

The conspiracy behind the hate speech

The image alone did not provoke the violence, but was embedded within a preexisting political dispute. The Daily Star, the largest English daily newspaper in Bangladesh, published an investigative report, which cited a political dispute between two local politicians as the primary instigator of the vandalism. Indeed, a local police officer said, “It was certainly a planned attack and different vested quarters took part in it for their own interests, capitalising on the anti-Islam post on the Facebook page of Rasraj Dash.”

Furthermore, after the attack on the Hindu community, several media agencies revealed that the “insulting” picture was most likely not actually published by Dash. The cybercrimes police unit submitted two reports. The first report said there was no trace of the “insulting” photo on Dash’s phone or memory card.  A second report included evidence that the image was edited on the computer of a local cyber café owner. Together, this suggests that Dash had nothing to do with the post, but that someone may have entered his account via a public computer to post the image.

On January 5 of this year, police arrested the individual suspected of instigating the violent attack on Dash’s community. The suspect in custody is a local ruling party leader. According to the police investigation, he is “one of the key instigators and organisers.” Police also said ‘’someone else uploaded [the offending image] using the account of Rasraj [Dash] as part of a conspiracy.’’ In spite of all of this, however, Dash remains in jail.

Sadly, this is not the first incident

The details of this attack are similar to a 2012 attack on a Buddhist community in the town of Cox’s Bazar. There, mobs destroyed 12 Buddhist temples and 50 houses in reaction to an image posted on Facebook depicting the desecration of a Quran. The violence later spread to other parts of the country. These incidents exemplify how using social media as a violent tool is on the rise. And in a similar fashion, the actual posting of the photo was not done by the Buddhist who was falsely slandered as having posted it. Clearly, it seems that the strategy of planting offensive posts and then using them to generate mob violence is being employed by certain political factions to spread fear and intimidate minorities.

The devastating side of social media in Bangladesh

Currently, Facebook is one of the few platforms on which free and independent media are distributed in Bangladesh. But, these above-mentioned incidents show a darker side to social media. Due to its widespread use, Facebook has become an easy tool to provoke community members to carry out violence. Furthermore, it has been used to incite violence through ‘viral hate,’ and to encourage radicalization.

Indeed, for many years Bangladeshis have been fighting for the free flow of information. Now that this freedom is seemingly at hand with the spread of the Internet and social media, it is being abused by various groups, including radical extremists and the government, both of whom are afraid of open debate and dialogue. The Bangladeshi government has already temporarily banned Facebook twice in the past few years. Further, the government is attempting to develop a new ICT Act, which is even more restrictive than its predecessor. The old ICT Act allows police to make arrests without a warrant, imposes a severe minimum prison sentence of seven years, and increases the maximum penalty for offences under the law from 10 to 14 years imprisonment. An act more restrictive than this might jeopardize Facebook’s ability to function as it does now, meaning that the last space for people to express their opinions would be blocked indefinitely.

The overall issues at play here speak to the larger democratic challenge of balancing freedom and responsibility. Social media platforms have opened up new doors for the spread of news and information, but these resources are also being abused by groups wishing to incite violence. Our task now is to find ways to prevent the abuse of social media while preserving these platforms as open spaces not subject to government censorship.

Ashif Rabi is a Bangladeshi journalist, TV personality, radio jockey, and blogger working to strengthen civic engagement and freedom of expression in the face of rising extremism and state repression. He is the former editor of Bicchu, a satirical Bengali-language cartoon magazine, and has published numerous blogposts on a range of topics, including religious tolerance and cultural diversity.