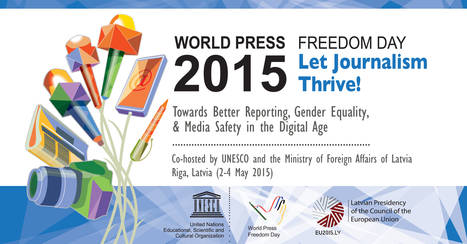 The theme of this year’s World Press Freedom Day is Towards Better Reporting, Gender Equality, & Media Safety in the Digital Age.  The issue of gender equality, in particular, highlights how women in the media industry continue to face challenges 20 years after the 1995 Beijing Declaration and Platform of Action.  Among other strategic objectives for empowering women, the Declaration calls for increasing “the participation and access of women to expression and decision-making in and through the media and new technologies of communication,” and promoting “a balanced and non-stereotyped portrayal of women in the media.”

In 2011, the DC-based International Women’s Media Foundation (IWMF) released a Global Report on the Status of Women in the News Media.  Research was expansive, covering more than 500 companies in 60 countries between 2008 and 2010.  Overall results show that women only occupy 36 percent of reporter positions and 27 percent of top management jobs, obviously not what the framers of the Beijing Declaration had in mind when they called for an increase in women’s expression and decision-making in the media.

Regional- and country-level results reveal even more.  For example, men generally outnumber women in the journalistic workforce throughout Sub-Saharan Africa. In Kenya, men outnumber women two to one.  In the Democratic Republic of Congo, women make up only fifteen percent of newsrooms.

South Africa is an especially interesting case that, due to the country’s overall progressive gender policies, the IWMF report highlights as a model to other Sub-Saharan countries. Post-apartheid policies have also been influential.

A 2013 report, for example, explores how the country’s 1998 Employment Equity Policies- which require companies with more than 50 employees to include affirmative action targets for race and gender- have affected newsroom compositions. As in any country, numbers vary. For example, television news channel Consumer News and Business Channel (CNBC) Africa, has a very female-dominated news staff (62 percent).  Daily newspaper The Witness, however, has an underwhelming female presence (35 percent).

Implementation of the 1998 policies, however, can be problematic.  Journalist Gaby Ndebele, who was interviewed for the 2013 report, fears that black female journalists in South Africa are at risk of being treated merely as “window dressing.”  She argues: “The newspaper appoints black females but requires them to report to a white male behind the scenes…they will create two positions for the same job… It is very disheartening to have someone always looking over your shoulder.”

Having more females in newsroom leadership positions can also promote the second strategic objective of more balanced and non-stereotyped portrayals of women.  A UNESCO report notes that only 21 percent of the people featured in news stories in 2005 were women.  Women journalists are often relegated to reporting on “soft stories” or “soft subjects,” like lifestyle, culture, and art, as opposed to more hard-hitting topics like politics, business, and conflict, reflecting cultural views that women cannot understand or participate in the latter topics.

As Nadine Hoffman of IWMF told me in an interview: “Having a critical mass of women in leadership positions can lead to coverage that’s more inclusive of women’s voices, more gender-balanced, and is simply more reflective of what societies actually look like.”  Hoffman recommends that a way to measure progress could be by looking at women’s bylines and seeing what kinds of stories they’re producing.

In the podcast above, you can hear more of Hoffman’s thoughts on the status of women in the news media and learn about IWMF projects aimed at getting more women journalists involved in creating new, more nuanced narratives.  CIMA will also be holding an event on April 22 in celebration of World Press Freedom Day, focusing on the roles of digital media, investigative journalism, and the international community in independent journalism in Africa.