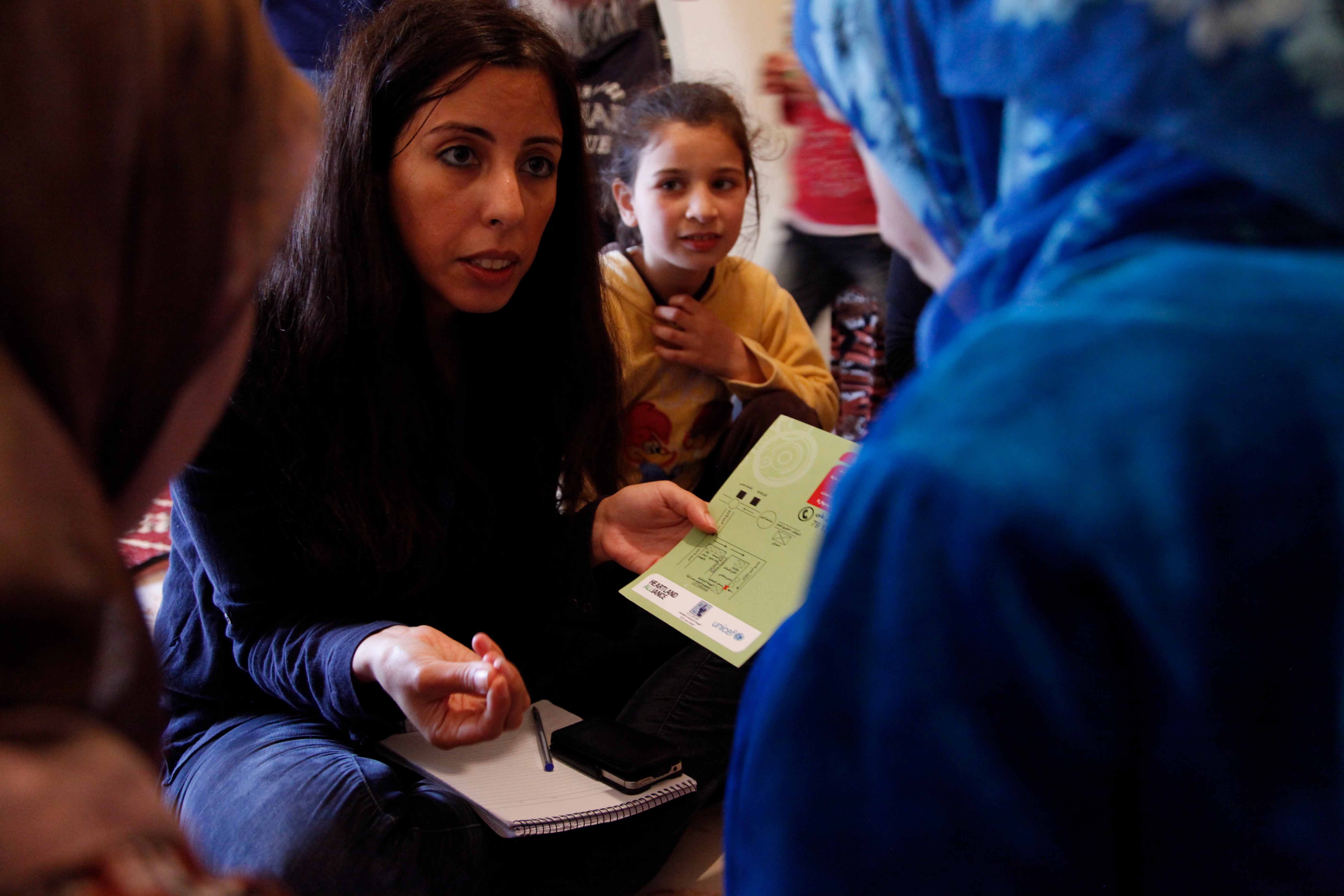 (Photo by UK Department for International Development and licensed via Creative Commons - CC BY 2.0)

Rula Asad, Caroline Ayoub, and Milia Eidmouni are tired of seeing the same image of a worn-down Syrian woman splashed across front pages around the world. The three women are all deeply involved in the Syrian media landscape; Asad and Eidomoni co-founded the Syrian Female Journalists’ Network (SFJN), while Ayoub co-founded Radio SouriaLi [Syria is Mine]. Together, they’re pushing for better media treatment of Syrian women – both within the industry and without. Improving the landscape will require major changes to traditional ways of thinking about women and media: stepping away from restrictive coverage of women that portrays them only as sexual objects and seeking out those women who are taking action to improve their communities. To do so, both Syrian and foreign media organizations will need to start from the inside, making concentrated efforts to hire women and interact directly with their audiences, and secure long-term funding that ensures gender-sensitive coverage can continue far into the future.

Here I break down the five most important takeaways from a recent panel that should guide media coverage of Syrian women. Caroline Ayoub, Milia Eidmouni, and Rula Asad shared their experiences working in Syrian media at a discussion hosted by the Middle East Institute on June 29. The panel was moderated by senior vice president Kate Seelye.

1. Covering stories of sexual and physical violence is not synonymous with covering women’s issues.

All too often, Syrian women are only represented in the media as the collateral damage of men. Stories of women who are refugees or victims of sexual assault, violence, and trafficking are common. Asad, Ayoub, and Eidmouni are unflinching when it comes to these stories: They do happen – all the time – but they are in no way the whole picture. But women’s interests and concerns are not unidimensional, and the only way to break the vicious cycle of the victimization of women in the media is by telling their stories in all their forms and including women with power and agency.

Covering a full spectrum of issues with sensitivity to gender is a challenge for any media outlet. Having women involved in the process of determining what stories are covered is a critical part of ensuring women’s stories get told. The Syrian Female Journalists’ Network was founded, in part, for this reason: it provides training and capacity building for women journalists so they are equipped to cover issues they care about. SJFN also brings male journalists into the conversation, who often hold power in editing or content development roles and who may not have been looking for stories about women.

2. Efforts to improve gender equity must start with media organizations.

Traditional media outlets in Syria – and around the world, for that matter – are still significantly male-dominated. Increasing the number of women working for a media organization is a big leap – but it’s one that Ayoub was willing to make, and other organizations should follow suit. At Radio SouriaLi, half of the station’s 27 employees are women – and the ratio will stay that way. Ayoub is clear about the importance of making sure that women are involved and making choices about the creation and distribution of content. Programs are not targeted exclusively toward women – a wide range of content appeals to everyone – but their gender sensitivity resonates with women.

The Syrian Female Journalists’ Network’s membership also remains predominantly women. One of its main objectives is helping to promote women’s journalistic careers and equal opportunities for women in all media jobs, and a crucial part of that mission is addressing institutional barriers for women in the journalism field. By providing a network in which women journalists can learn about media practices and connect with male editors and directors of media outlets, SFJN is taking important steps to break down barriers, push back against discrimination, and get more women into media jobs.

3. Media owes it to Syrians to seek out positive and interesting content.

There is a widespread sense of fatigue and hopelessness when it comes to the traditional ‘war stories’ about death, tragedies, and government and aid failures. People are hungry for a wide variety of content – to inform, to entertain, to reminisce. One of Radio SouriaLi’s most popular programs is a cooking show; in each episode, hosts discuss a recipe from a specific Syrian province, as well as that province’s cultural traditions and history. The goal, says Ayoub, is to foster a sense of connection and open a conversation about Syria through food – something universally enjoyed. Storytelling programs, which sometimes contain dark stories of sisters or friends lost to the war, are presented in such a way that they have a positive function: they remember, honor, and reminisce upon what is lost.

Western media sources often come to Syria looking for stories that fit a predetermined list of ‘interesting’ topics – like ISIS activity or the struggles of refugees – calculated to drive the most consumption among Western audiences. This pushes out what Asad calls ‘hero stories’ – the work of Syrians who are actively trying to better their lives and their communities. As a result, these stories only contribute to the already-bleak media landscape. Media outlets should take cues from the citizen journalists and alternative media outlets that have appeared since the onset of the civil war to seek out news that both informs and humanizes. Asad goes so far as to say that the conflict has a silver lining – conflict allows people to be more open and honest with each other. Positive stories use this honesty to build relationships and make people feel connected.

Funding is a major issue for many Syrian media outlets. According to Asad, Ayoub, and Eidmouni, the number of functioning media channels in the country has dropped drastically, from several hundred before the conflict to less than one hundred at present. They note that maintaining a diverse media landscape with a variety of channels is just as important as building channel capacity – a challenge which may be addressed, in part, by international funding.

Many foreign media investors, which want to assist struggling independent media in Syria, are often interested only in providing funding that is contingent upon the completion of short-term projects dictated by Western interests – the stereotypical war stories the panelists find so damaging. Such contracts take agency away from local media, who are better attuned to the whole story of their country, and doesn’t allow for sustainable, long-term funding. Both of these results hurt women: first, by the perpetuation of damaging stereotypes, and second, by contributing to the funding insecurity in the journalism field that prevents many women from relying on journalism as a full-time job. All of the panelists agree that maintaining a steady flow of funding to their organizations is a major challenge that consumes time and energy.

5. Social media is a critical tool for tuning in to what audiences need.

SouriaLi has several staff members whose jobs are entirely dedicated to social media interaction. It’s very important to get feedback from listeners about what they want and how they feel about programs. Social media also allows their listeners to get involved with the storytelling, even if they are ‘trapped’ inside remote or military-controlled areas of the country. One program allows people to use WhatsApp to send in personal stories, which may then be turned into radio content and broadcasted, deepening the variety of experiences listeners are exposed to. Social media has also allowed SouriaLi to shift some of their attention to accommodate Syrians living outside of Syria, a population that is growing by the day and that has a very real need for media that speaks to their culture and interests.

Social media is also a critical tool for journalists in SFJM, who use applications like Skype, GoogleDocs, and WhatsApp to communicate securely with each other and with sources. In Syria, which has consistently been ranked as the most dangerous country for journalists, managing channels of communication needs to be balanced with security concerns; social media, for many, is providing a way through.

Madeline Wilson is an intern at the Center for International Media Assistance at the National Endowment for Democracy. She is a student at Washington University in St. Louis, where she is studying International Affairs, French, and economics. Follow her on Twitter @maddiegwilson.