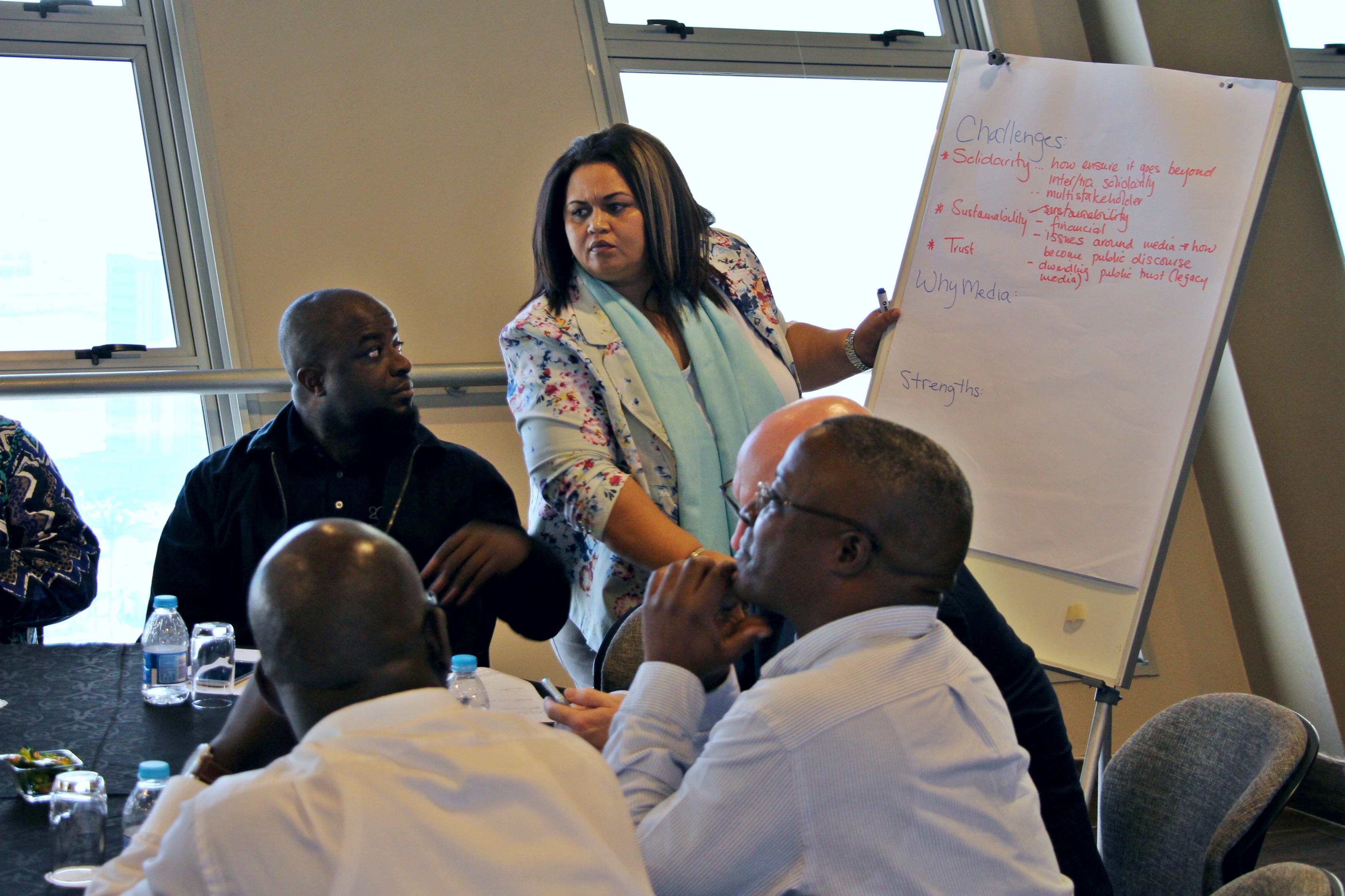 Participants at a regional media consultation discuss how to jump-start media reform efforts in Africa. (Photo by Paul Rothman)

“Attacks on the media are the starting point of aggression, and a clear indicator that lawyers will be next.”

These were the ominous words of Henry Maina, Director of Article 19 in East Africa, at a session of the annual Pan-African Lawyers Union (PALU) conference in Durban, South Africa that explored the importance of engagement between media actors and the legal community in terms of protecting space for independent media and civil society.

The session took place at the conclusion of a multi-stakeholder consultation, organized by CIMA and Deutsche Welle Akademie, involving 36 representatives of media organizations, civil society, state regulators, and multilateral institutions from 15 countries across Sub-Saharan Africa. The aim of the meeting was to support African efforts to build a broad coalition to improve media systems and create a strong voice in national and international policy debates. It was the third in a series of regional consultations on media environments and how to respond to multiple challenges facing independent media and journalism around the world.

Because independent media require a legal enabling environment in which to operate, it is no accident that the regional consultation for Sub-Saharan Africa took place at a meeting of lawyers and judges. As principal players in building and safeguarding laws that protect journalists and media outlets, the legal community is a critical stakeholder in conversations about media systems and efforts to improve them at the national and regional levels.

One could argue that engagement with the legal community on media systems is more important than ever with the increasingly prevalent crackdown on independent voices by authoritarian-minded governments throughout the world. Indeed, according to Don Deya, CEO of PALU, “governments have learned to appropriate the language of the rule of law. We’re seeing laws that are regressive, but cloaked in the language of the rule of law.”

The Challenge of Defining Priorities in Africa Participants map the issues that most impact their countries in order to determine a practical path forward.

One of the core objectives of the regional consultations being facilitated by CIMA and Deutsche Welle Akademie is to define priority action items in the region for the media sector. In a areaas large, diverse, and dynamic as Sub-Saharan Africa, this was no easy task. However, despite the range of languages, legal systems, political environments, and economies, the participants in the meeting managed to coalesce around the idea of creating a multi-stakeholder network in the region that would focus on four core objective areas:

Although broad in scope, the focus areas allowed the group to collectively explore and identify steps to be taken in the coming months to set the network in motion:

Mapping existing networks: A mapping exercise will identify the existing stakeholders and networks that could form the basis of this wider network.

As Mubin Bakare of the Economic Community of Western Affrica (ECOWAS) noted during the proceedings, it is critical that consultations like the one held this week in Durban result in manageable action plans in pursuit of an ambitious goal. In the end, the diverse group of stakeholders in this meeting reached a common set of priorities and clear actions that could mark the beginning of a collective effort in Sub-Saharan Africa to shine a light on the critical role of media in democratic societies, improve cross-sectoral engagement on issues facing the media, and improve international efforts to support media in the region. Just as the previous consultations in Latin America and Southeast Asia have prompted important follow-on action, the hope is that this consultation for Sub-Saharan Africa was just the starting point for collective action at the national and regional level to improve media systems in the region.