Defending Digital Rights in the Democratic Republic of the Congo: A Conversation with Passy Mubalama 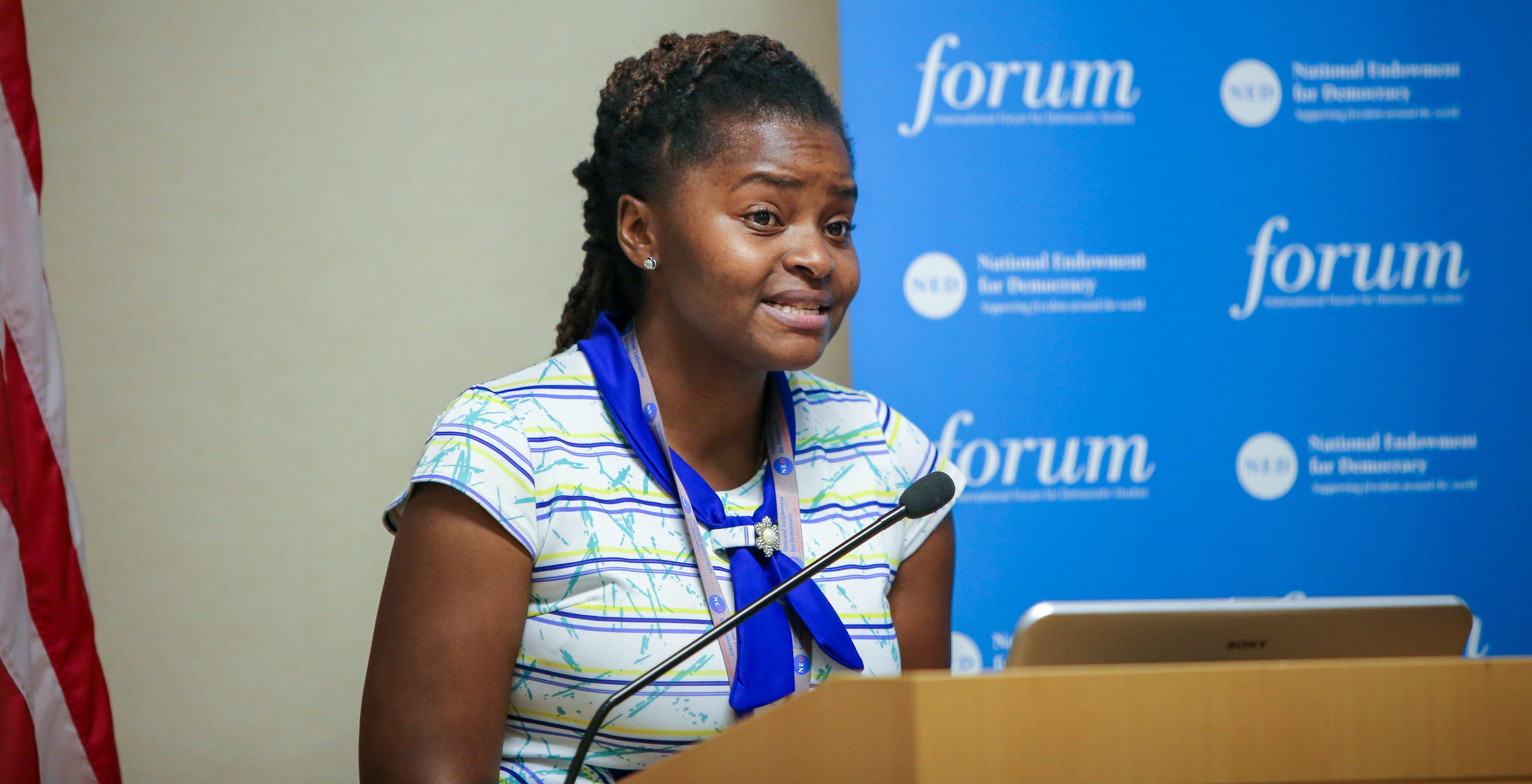 Passy Mubalama speaks at the National Endowment for Democracy.

While the Democratic Republic of the Congo (DRC) is the fourth largest country in Africa in terms of population, it has one of the lowest levels of internet accessibility across the continent. Weak democratic governance and the prevalence of several armed groups has left the DRC to face a severe decline in civil liberties, including the stifling of freedom of expression online. According to Quartz Africa, “with an internet penetration of just 6.2%, the DRC has repeatedly cut off internet services to its more than 83 million people, blocked or throttled social media outlets, and surgically targeted services like WhatsApp, Facebook, YouTube, and Skype in order to hamper communication among protesters while allowing businesses like banks to operate.” Ahead of the general election scheduled to take place in December 2018, many citizens fear that internet freedom in the country will continue to decline, and that the risk for journalists, civil society, and private sector groups expressing views online will be even greater.

To hear a first hand account of the specific digital rights violations that are occuring in the DRC, I spoke to the Founder and Executive Director of Action and Development Initiative for the Protection of Women and Children (AIDPROFEN) Passy Mubalama. She provided her take on the state of democratic governance in the DRC and the threat to digital rights.

Why do you think an open and inclusive internet is important for democracy?

I think that a true democracy cannot exist without an internet that is open, accessible, and encourages freedom of expression. In my view, a democracy creates an environment where journalists and civil society organizations do not fear being killed or arrested for what they post online. I’ve seen first-hand how journalists who publish “sensitive information,” such as reported human rights violations, fear such retribution.

What types of digital rights violations are you seeing in the DRC?

In the DRC, there are several digital rights violations – the first of which is access. The internet penetration rate of the DRC is around 6%, making the internet a non-inclusive medium of communication. Access to the internet is also highly expensive in the DRC, preventing marginalized communities from participating in the online space.

When political protests or elections occur, the government’s immediate response is to shut down the internet so that civil society cannot continue to organize through social media and other platforms, and to prevent information about the protests in the DRC leaking into other countries, which would then potentially provoke global response to these violations. The consequences of internet shutdowns are enormous. Not only can citizens not access information, express and debate views online, but citizens can’t even access their bank account or participate in the digital economy. Imagine what that’s like.

Finally, there is an increased stifling of independent voices on social media platforms. In 2016, when President Kabila announced his refusal to leave power, the government’s grip on the internet increased. With this increased control, civil society advocates and journalists found it harder to express themselves online.

There is also an enormous amount of human rights violations that occur in the northern provinces in the DRC, where citizens are killed every day. Many journalists believe that it is important to shed light on these issues through social media to gain international attention, but there are many cases where these journalists are targeted, or the internet shuts down.

Do you see these same trends at a regional level?

On a regional level, I find the issues of internet shutdowns and access to information to be extremely prevalent across several countries in Africa. There are several instances where governments from countries such as Uganda and Cameroon will order a shutdown of the internet in times of political protests or elections. In several countries especially in sub-Saharan Africa, most rural communities have little or no access to the internet. One example that shocked me personally was when I visited the African Union in Ethiopia. While I was there, I had a really great connection to the internet. As soon as I left the compound, I could not open any website on my phone.

These issues are global. Using the internet as a tool to control citizens and to maintain authoritarian control is a violation of human rights. It impedes the ability of democracy to function and thrive.

Based on your experience working at AIDPROFEN in Goma, what are the primary challenges to increasing women’s participation online?

The majority of internet users in the DRC are men and youth. In several cases, there is a cultural barrier to encouraging women to participate online. Culturally, there is a sentiment that the internet is bad for women, and it is an environment where evil (i.e. pornography) occurs. Because of this, men are encouraged to participate in the online space more often than women. I think we need to try and break down these traditional norms to increase women’s participation online. I think it is important to provide women and girls training on digital security to prevent online harassment and sexual abuse, in that way we can protect women and girls.

In recent years, there has also been an increase in violence against women. Women who do participate in online discourse are often harassed online and offline. To give you an example, there was a famous female journalist and political analyst in the DRC who was well respected by several communities. In response to her increased published news articles, an inappropriate video of her was shared to a large number of viewers, and then she was immediately removed from her position as a journalist.

I think more training on digital rights literacy is vital. I also think we need to make more efforts to bring more women and marginalized communities into the conversation by providing them with the technology and training they need to participate online. By doing this, we can slowly work to shift cultural norms and create the narrative that the internet can be used as a tool for good, if used correctly.

We also need to work with mobile providers, technology companies, and governments to lower the cost of the internet. If the cost of internet is lowered, more communities will be able to participate and collaborate with others to push back against other digital rights violations.

How should we begin to create an environment where digital rights violations are reduced and the prospects of an open and inclusive internet could become more of a reality?

I think digital rights violations can only be solved through a multi-stakeholder approach. Since the civil society community is very active and engaged, it is important that these groups work directly with the government to highlight the importance of access to information and freedom of expression online. It is vital to work with the government to ensure long standing change.

In the DRC, civil society organizations are very active on social media platforms and use the internet as a tool to organize, assemble, and hold their government accountable. When the government feels threatened, internet shutdowns occur and this is not the solution.

Morgan Frost is the Assistant Program Officer of Global Programs at the Center for International Private Enterprise (CIPE) in Washington, D.C., where she focuses on cross-regional projects involving digital economy and development, internet freedom, and women’s economic empowerment. Prior to joining CIPE, she was a Program Assistant at the National Democratic Institute (NDI) focusing on internet freedom, technology in international development, and preventing violence against women in elections.

Passy Mubalama is a pro-democracy and women’s rights activist from the Democratic Republic of the Congo (DRC). She is founder and executive director of Action and Development Initiative for the Protection of Women and Children (AIDPROFEN), a nonprofit organization that promotes women’s rights in the eastern region of the DRC. She is currently a Reagan-Fascell Democracy Fellow at the National Endowment for Democracy (NED).