Fighting for Survival: New Report on Media Startups in the Global South

Panic about the business model for journalism has surfaced again in the United States with the recent layoffs at Buzzfeed, Mic and, Vice. But digital-first outlets in the Global South have known for years that survival is extremely difficult especially for global muckrakers who want to hold power to account and do serious reporting. Getting creative, borrowing office space, relying on volunteers and citizen journalists, keeping costs low, holding events and doing consulting will only get you so far. Many of these start-ups have learned that funding from foundations (Gates, Luminate, Open Society Foundation) and grants from European governments, USAID, and DFID is essential to their survival. The Center for International Media Assistance has been working to persuade donor countries to spend more on supporting media in the global south.

In 2015, I worked on the report Publishing for Peanuts, which surveyed 35 media startups, often run by brave journalists in dangerous conditions. In 2018 we decided to go back and see how the outlets had fared in their efforts to become self-sustaining. Despite breaking news, having impact, and planting themselves firmly in their local communities, they are mostly still dependent on donor funding. Three of the outlets had failed, and six had been seriously reconfigured or renamed.

Not everyone replied to our queries, but in the end, we spoke to 21 outlets from 2015 and five outlets we had not interviewed before. In hour-long interviews we conducted between July and December 2018, we asked the editors and founders to describe their business models and to reflect on their mission, their successes and failures, and how they survive. Among others, we spoke to Daily Maverick (South Africa), Frontier Myanmar (Myanmar), Himal Southasian (recently forced out of Nepal and now based in Sri Lanka), Malaysiakini (Malaysia), Oxpeckers (covering Southern Africa), and Sin Embargo (Mexico). We included sidebars on the bloggers in Kenya and the investigative digital-first scene in Mexico. 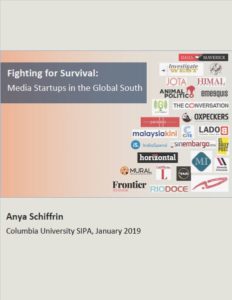 It’s time for donors to accept that many of the outlets they support—which are so essential to society—need help to survive. The job for donors is to coordinate their efforts and to figure out how to help without creating market distortions. Indeed, too much competition for outside funding can create little incentive for innovative startups to pop up in the future. At the same time, donors need to ensure that they are not keeping alive outlets that do not have a significant audience. This is a difficult balancing act, but one that can be accomplished by better collaboration among donors.

The report, Fighting for Survival: Media Startups in the Global South, is available here.

Anya Schiffrin is the director of the Technology, Media and Advocacy specialization at Columbia University’s School of International and Public Affairs. She is a member of the advisory board of Open Society Foundation’s Program on Independent Journalism and the Natural Resource Governance Institute and in spring 2016 joined the Global Board of the Open Society Foundation.