Fighting on Two Fronts: Journalists in the Philippines Battle Censorship Online and in the Courts 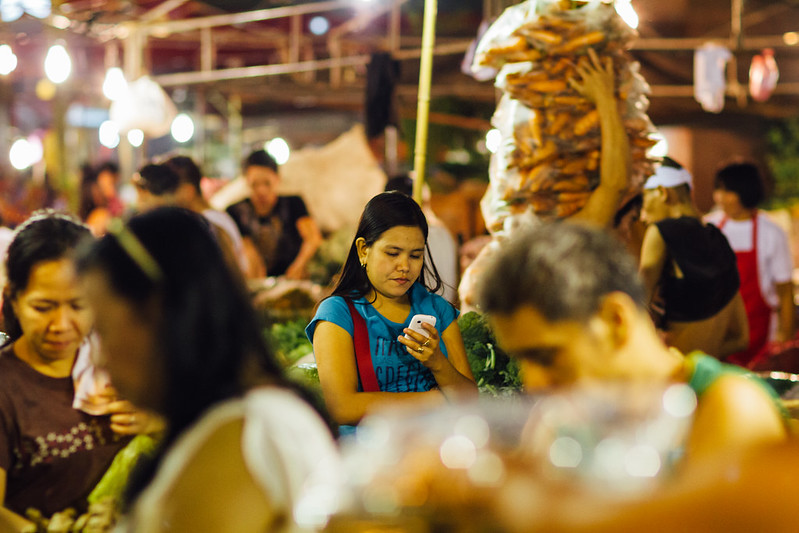 A woman checks her cellphone in Divisoria Market in Manila (Photo by Adam Cohn, CC BY-NC-ND 2.0)

For journalists in the Philippines, the battle against disinformation occurs on two fronts: online and in the courtroom.

Take, for example, the case of Rappler, a hard-hitting digital news outlet created in 2012 by a group of well-respected Filipino journalists. Since its inception, the site’s journalists have consistently produced unflinching reporting on human rights abuses in the country, including those of the country’s strongman president Rodrigo Duterte. Elected in 2016, Duterte instigated a controversial “war on drugs” that has resulted in the killing of thousands of Filipinos.

In response to their reporting on these issues, Rappler’s journalists have faced attacks on both fronts. On social media, automated bots pledging support for the Duterte government flood the digital space with disinformation, drowning out independent reporting. In the courtroom, high-level judges use legal loopholes to throw journalists in prison. This combination of censorship tactics has contributed to the country’s rapid democratic decline.

In many developing countries, mobile operators and social media platforms such as Facebook have partnered to provide the public with free access to specific websites, including news websites. The Free Basics initiative, for instance, was created as a “data-lite” version of Facebook that provides free access to Facebook, and which was specifically targeted to low-income smartphone users who otherwise would have been unable to afford the data necessary to access Facebook’s platform.

Rappler invested in making Free Basics a central component of its news distribution strategy. The news site created “data-lite” versions of its stories and promoted the use of Free Basics to its audience. Rappler’s goal was to expand its audience to those who previously could not afford regular access to the internet, and therefore provide a greater number of Filipinos with access to independent news.

The news content Rappler made available on Free Basics was viewable in its entirety to the user for free. Unfortunately for Rappler, relatively few readers took advantage of this opportunity. Rappler’s head of research and content strategy, Gemma Mendoza, believed it was the sub-optimal viewing of a lite version of Facebook that pushed users away.

Local mobile providers offered another door to free content–promoting unlimited access to Facebook as a way to draw in new customers. But free access to Facebook was a double-edged sword. A user might see a link to an article shared by a friend, but if they clicked to read more they either incurred a charge for using mobile data, or were prohibited from viewing it altogether because they had already reached their data cap.

Because readers were often unable to read the full stories, they became susceptible to manipulation through intentionally misleading headlines. Indeed, Facebook itself would become the platform of choice for political allies of Duterte as they flooded the digital space with disinformation to drown out independent reporting. As a result, the social media platform has increasingly become a toxic realm for news outlets reporting the truth. What began as an opportunity to increase audience viewership and engagement through social media would quickly evolve into a tool for what some have called a new form of government censorship.

A New Form of Censorship Online

On social media, automated bots, disguised as real accounts are often used to promote content, attack others, or create trending topics to influence users. In the Philippines, such automated bots flood the online space with fake headlines and targeted attacks against journalists.

This new form of distributed censorship uses bots to overwhelm the social media platforms with false information, drowning out independent reporting rather than directly censoring it. In an environment overflowing with content but low on data, distributed censorship online disrupts the Philippine media ecosystem by effectively silencing journalists. It also makes it more difficult for average Filipino citizens to sort out fact from fiction.

For example, political allies of Duterte created networks of automated bots to stir up online support during the 2016 election. Four days after Duterte declared his candidacy, digital tags associated with his campaign rose to over 10 times the combined mentions of his rivals. This was likely caused by bots posting hundreds of times per minute. Not only did this tactic increase Duterte’s visibility, but the sheer amount of bots also drowned out independent media online. As a result, Filipino voters were limited to consuming the Duterte campaign’s election propaganda.

Attacks on Journalists have spilled over in the Real World

Echoing the toxic environment online, real threats and physical attacks on journalists have also increased—part of a larger trend of democratic backsliding in the country. As of May 2019, Rappler reported at least 128 incidents of attacks and threats against Philippine media since Duterte was elected in 2016. This number includes 5 physical assaults, 5 verbal threats and assaults, 12 killings, 18 events of online harassment and 10 website attacks.

In the courtroom, journalists have faced laws labelling them as criminals. Philippine journalist and co-founder of Rappler, Maria Ressa, and fellow journalist Reynaldo Santos Jr., were both found guilty of “cyber libel” in June, and face up to six years in prison. The verdict has drawn international attention, as media freedom advocates argue it is a direct effort by the Duterte administration to censor independent media. With this conviction, the Philippine government has succeeded in executing a hybrid censorship–both online and off–that silences independent media and threatens the state of the Philippine democracy.

A Legal Loophole and a Battle on Two Fronts

Rappler’s journalists have consistently produced reporting on the Duterte government’s human rights abuses, but the article prompting the current case against Ressa and Santos predates the administration. The article links a businessman, Wilfredo Keng, to illegal drug and human trafficking. Using what amounts to a legal loophole, the government retroactively—and controversially—applied a cybercrime law that did not exist when the piece was published in 2012.  Although this article did not have a direct connection to Duterte at the time it was published, the controversial methods used to convict the journalists suggest attempted retaliation for Rappler’s more recent articles focused on the administration’s human rights violations.

With disinformation ravaging the online information space and one of the country’s most prominent journalists facing jail time over a legal loophole, the Philippine government has successfully executed a hybrid form of censorship. Filipino journalists must fight the battle both on social media and in the courtroom.

The consequences are devastating not only for Rappler and Maria Ressa, but all Philippine journalists working to disseminate quality independent reporting online. Ressa’s conviction has ostensibly proven the Duterte government’s willingness to move forward with a more visible, direct form of censorship. Now, to ensure Filipino’s are consuming quality independent news, journalists must find a way to increase the visibility of their reporting online, while also avoiding the threat of legal action.

Ann Lewandowski is the Program Assistant at CIMA. In this role she provides multifaceted administrative support to the team and assists with projects as needed. Prior to joining CIMA, Lewandowski monitored developments in media freedom through an internship with the International Press Institute and as president of Reporters Without Borders at IU. Lewandowski holds a BA in Journalism and American Studies from Indiana University with a concentration in News Reporting and Editing. You can find her on Twitter at @alewandowski17