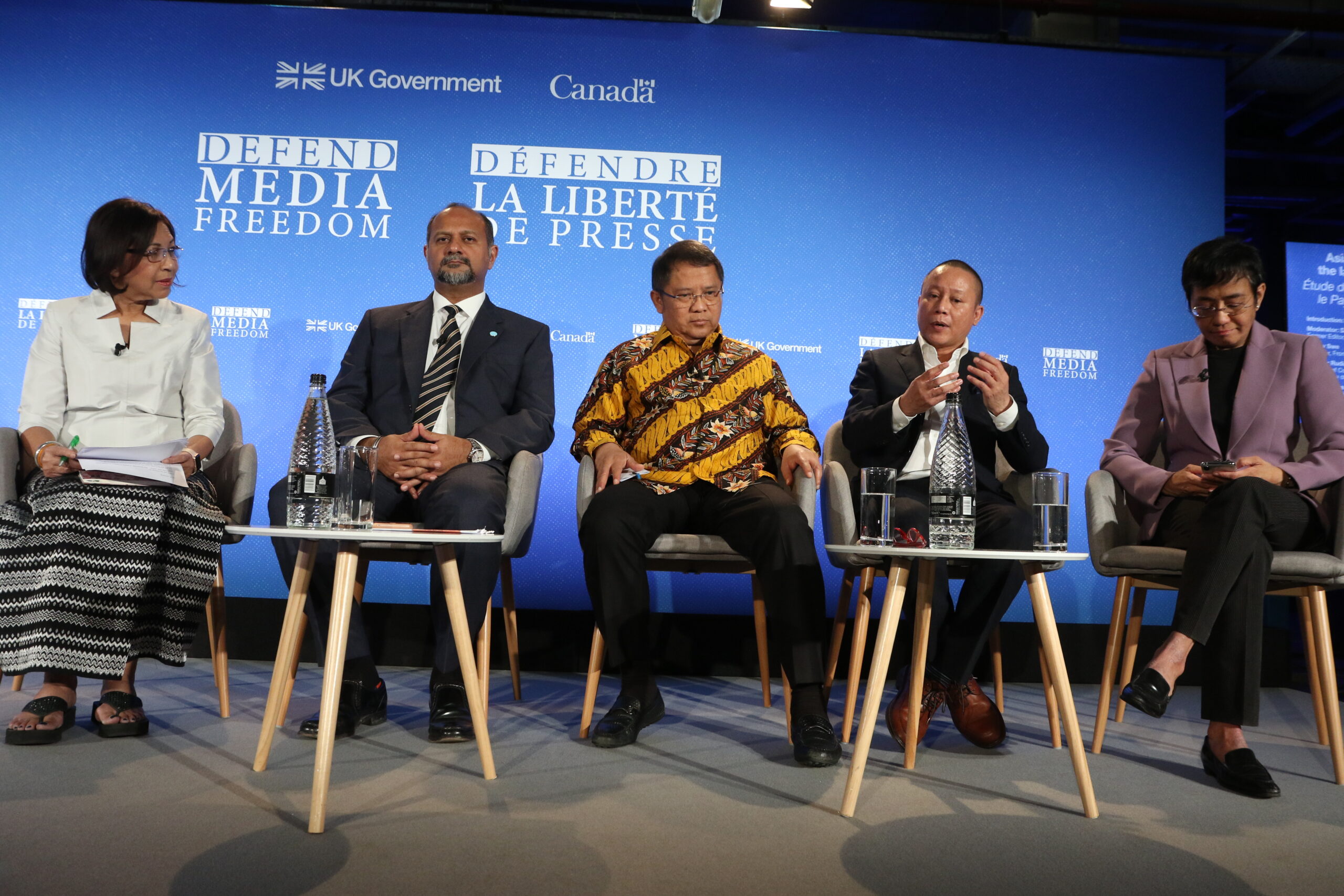 In the past five years, the number of intergovernmental initiatives supporting media freedom has increased significantly. Major examples include the Media Freedom Coalition (MFC), the International Partnership for Information and Democracy and most recently, the US-led Summit for Democracy.

This growing constellation of international initiatives is a welcome response to the increasing threats to media freedom around the world. According to The Committee to Protect Journalists’ (CPJ) annual census of jailed journalists, there were a record 363 journalists behind bars as of December 1, 2022.

But within this growing ‘diplomatic turn’ toward supporting media freedom, it is important to ask: what kinds of media freedom are being promoted and whose priorities do they serve? This is an important question because different interpretations of media freedom influence how media support funds are spent, how diplomatic energies are directed, and whose speech is protected—and from which threats.

An international research team has explored this question through an extensive analysis of the Media Freedom Coalition between 2019 and 2021—involving 55 interviews with key stakeholders, observations, and document analysis. This Coalition describes itself as “a partnership of 51 countries. . . working together proactively to advocate for media freedom at home and abroad.” In an official response to the research, UNESCO characterized the MFC as “unique and a first” and “a real shift in international relations in this area,” because it is the first “coalition of member states gathered around the specific topics of media freedom and the safety of journalists… at the highest political level.”

The findings—which were recently published in full in the Journal of Communication—suggest that a more inclusive agenda for supporting media freedom is needed to tackle the growing threats to journalists around the world.

A Narrow Interpretation of Media Freedom

The analysis demonstrated that, during its first two years, the MFC consistently focused on high-profile cases of the imprisonment and murder of journalists in non-member states. As its founder, UK Foreign Secretary Jeremy Hunt, said in an interview,

States were making calculations that the cost of knocking off a journalist was bearable… For me, the purpose of this campaign [was] to raise the [diplomatic] price so that it was too high. I wanted us to have a list of journalists that were locked up, that countries in the Coalition would agree we would all mention . . . [to] change political calculations and increase the costs to those who abuse media freedom.

Although Hunt acknowledged that economic hardship posed a significant threat to media freedom in many countries, he noted that this is not the MFC’s main focus:

There’s an economic risk to media freedom. I came across that issue. But overall… I think, basically, everyone knew that we are talking about countries where journalists are not free to write copy that criticises the government of the day.

This narrow interpretation of media freedom—concerned primarily with governments, ‘other’ countries, and physical and legal threats—was helpful in strengthening the rhetoric of the MFC’s public statements. It also encouraged a relatively large number of states to join the MFC—by offering them a strategically valuable identity as ‘democracy defenders.’ Finally, it provided states without significant financial resources with a cost-effective way of taking action on media freedom.

However, by focusing almost entirely on threats from governments, the MFC downplayed the role of non-state actors, such as social media platforms and drug cartels. It also avoided highlighting the role of local state authorities—which generally have far greater responsibility for violence against journalists than national authorities.

The Coalition’s focus on ‘other’ countries also made it “very ineffective at holding its own members to account,” as one civil society representative said. During its first two years, the MFC did not publish any public statements condemning its own members—despite clear violations of media freedom in countries such as Afghanistan, Croatia, Slovenia, Sudan, and the US (although Afghanistan has now, finally, been removed as a member of the MFC).

Finally, the Coalition’s emphasis on specific, high-profile cases legitimized a reactive and “resource-light” response amongst some of its wealthier members, because it required less costly and time-consuming interventions than designing comprehensive aid programs, as one senior civil servant explained. This is a problem because, as Internews argued at the time,

Whilst the most egregious affronts to media freedom rightly draw the most international attention, they are a smaller component in a landscape of threats affecting tens of thousands of journalists globally . . . Well-resourced programming in this area will be more likely to achieve lasting impact than advocacy and diplomacy alone.

Why did the MFC choose to promote media freedom in this way? The analysis shows that the MFC’s narrow interpretation of media freedom was only partially influenced by the views of its founder, Jeremy Hunt. It was also heavily shaped by a complex combination of other factors, including bureaucratic politics, existing international initiatives, and pressure from civil society groups and foreign ministers from other member states.

The MFC’s approach to media freedom was also strongly influenced by a perception amongst its most powerful members that it contributed directly to a wider geo-political agenda of challenging rising authoritarianism and re-affirming democracy. As one diplomat said,

Since we don’t have a consensus on democracy and rule of law at the UN—because it is being very actively undermined by [authoritarian countries]—these [coalitions] are where democracies go to nurse their wounds and try and plot their comeback. That is part of the picture where the MFC fits in.

This view of media freedom as the “the tip of the spear right now of the effort to defend against democratic backsliding”—as one diplomat put it—reinforced the MFC’s narrow focus on physical and legal threats, committed by non-member governments. By making statements about such cases, MFC members could characterize authoritarian states not just as abusers of media freedom, but as threats to the rules-based international order.

Given this, it is important to consider how this wider geo-political agenda of challenging authoritarianism could be affecting other international media freedom initiatives. It may help to explain why there has been a recent ‘diplomatic turn’ toward media freedom, for example. Yet it might also be shaping the direction of this ‘turn’—potentially toward a relatively narrow, state-centric direction, focused on ‘other’ countries. This is a problem because, as Lindsey Palmer recently argued,

If . . . press freedom groups are discussing the threat to press freedom from [a narrow] perspective, they run the risk of simplifying or altogether overlooking the needs of some of the journalists for whom they attempt to speak.

Toward a More Inclusive Agenda for Supporting Media Freedom

One solution to this problem is for international media freedom initiatives to adopt a broader understanding of the multiple, interlinked threats to media freedom. To do this, they need to ensure their actions are informed by an awareness of the diverse, dynamic, and complex priorities of journalists around the world—and not just by wider geo-political agendas.

The MFC, for example, should continue listening closely to its increasingly diverse membership which now includes countries covering six continents, including Argentina, Canada, Japan, Kosovo, New Zealand, and Sierra Leone. This should be done not to avoid the impression that the MFC is “just a white, Northern, Western hemisphere sort of thing,” as one diplomat put it when the MFC was founded, but to genuinely understand and respond to the wide variety of experiences of its members.

The US recently announced that the second Summit for Democracy, on March 29-30, 2023, will be co-hosted with the governments of Costa Rica, the Netherlands, the Republic of Korea, and the Republic of Zambia. Let’s hope this is a genuine step toward establishing a more inclusive agenda for supporting media freedom. The research suggests that pressure from civil society—in tandem with ministerial ‘champions’—is likely to be the most effective way of ensuring that it is.

The full research, which this article summarizes, is available here: Whose media freedom is being defended? Norm contestation in international media freedom campaigns | Journal of Communication | Oxford Academic (oup.com). This research is part of a wider project entitled Researching Media Freedom in a Time of Crisis.