Most killers of journalists walk free. The statistics are staggering: worldwide, almost nine out of 10 cases of journalist killings are met with impunity.

To mark the International Day to End Impunity for Crimes against Journalists and the tenth anniversary of the UN Plan of Action on the Safety of Journalists and the Issue of the Impunity (UNPA), CIMA spoke with Zoe Titus, director of the Namibia Media Trust and chairperson of the Global Forum for Media Development, about how civil society can fight impunity for crimes against journalists in Southern Africa.

Ranked eighteenth on the RSF 2022 World Press Freedom Index and second in Africa, Namibia is one of the safest countries in Africa for journalists, but the continent faces a host of press freedom challenges.

A recent pilot study produced by the International Press Institute found that the majority of press freedom violations and attacks on journalists in sub-Saharan Africa are committed by state authorities. Prosecuting these crimes is particularly challenging in conflict zones, where the judiciary and government are often compromised and the safety of the entire population may be at risk.

When authorities themselves are to blame for attacks, what can be done to prosecute them? Titus believes that the answer lies in local civil society organizations (CSOs). 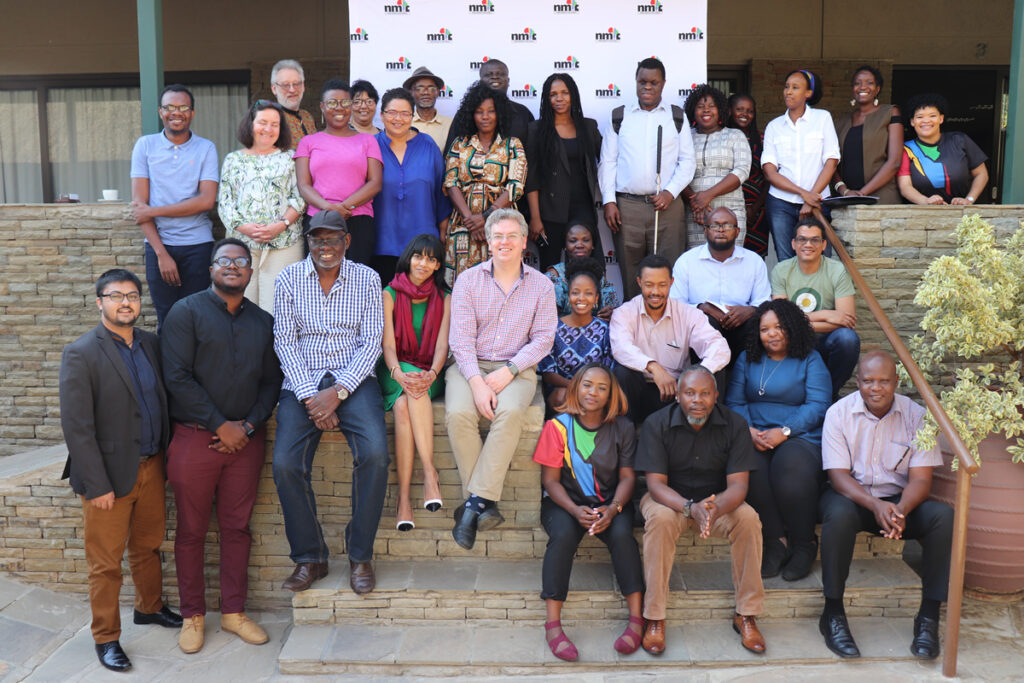 Participants at the Southern African sub-regional consultation on the revision of the draft Declaration of Principles on Freedom of Expression and Access to Information in Africa. Credit: Namibia Media Trust

“For a government to proceed to investigate the killing or the abuse of a journalist requires political will. If it is an authoritarian government, who is not concerned at all about the safety of a journalist—who is completely dismissive of it—we then have to look for alternative means,” Titus said.

These alternative means may include the use of so-called “soft law” mechanisms that CSOs can use to campaign for the prosecution of crimes against journalists. Soft law mechanisms are tools, such as recommendations or guidelines, that are not strictly legally binding but can influence traditional law.

In Africa, one of the key soft law mechanisms is the Declaration of Principles on Freedom of Expression and Access to Information in Africa. Originally written in 2002 and revised in 2019, the declaration articulates a framework for protecting freedom of expression across the African Union (AU).

Through the declaration, member states are required to submit periodic reports to the AU on freedom of expression, access to information, and journalist safety. CSOs can do their own monitoring and provide shadow reports to hold governments accountable, Titus said.

If a state is unwilling to cooperate, CSOs can appeal to the Special Rapporteur on Freedom of Expression and Access to Information in Africa to conduct an official investigation or file suit with the African Court on Human and Peoples’ Rights. Additionally, the African Commission on Human and Peoples’ Rights recently passed Resolution 522 on the Protection of Women Against Digital Violence in Africa which recognizes that online attacks and harassment of women journalists are some of the most serious threats to media freedom and journalist safety.

Titus said that soft law is beneficial and complements the ‘arsenal’ of human rights mechanisms intended not only to affect state behavior, but also the strategy and policy of the African Commission with regard to impunity. She pointed out that civil society is using soft law mechanisms effectively, but acknowledged that their use can and should be expanded.

“In the absence of our governments having a concrete national law or instrument that guarantees the safety of journalists, we can refer to AU resolutions as a reference, and require them to conform to that resolution by virtue of being a member of the African Union,” Titus said.

One of the core areas of the UNPA is monitoring and reporting on the state of press freedom and journalist safety. Titus noted that there are many organizations across Africa that monitor and document press freedom violations on a day-to-day basis, but these groups face numerous challenges.

First, most are too overworked and under-resourced to do so effectively. Additionally, large international organizations depend on local CSOs for information but sometimes do not properly acknowledge their contributions. This makes for reports that lack depth and context.

“Why are we not developing the capacity of local actors to do that and to be consistent in updating and following up on violations? They do, after all, understand the context better,” she said.

The role of international organizations should be to support and amplify the work of local actors beyond the continent. This important and mutually beneficial collaboration is necessary for improving North-South cooperation on media development. “If we work in this way, the unequal power dynamics will shift. There is, after all, space and relevance for all in this critical issue,” she said.

Titus is working on bringing local media monitoring organizations in the region together with the Special Rapporteur on Freedom of Expression and Access to Information in Africa to develop a common template for recording press freedom violations that would break down reports in a database by region, gender, nature of the attack, and more.

“If we fail in recording the information properly, we will not be able to get to the point where we are able to litigate the issue effectively enough to get justice,” Titus said. “From the onset, the documentation needs to meticulous, so that you’re working towards a scenario where you are enabling the Special Rapporteur to take your case further.”

Titus pointed to the killing of Carlos Cardoso in Mozambique as one of the only cases to be adequately resolved in Southern Africa. Cardoso, an internationally-acclaimed investigative journalist, was killed in 2000 for his reporting on alleged fraud at the Mozambique Commercial Bank.

Titus said the case was resolved because CSOs followed the case every step of the way and spurred strong local and international support. Additionally, the Mozambican government allowed the media to publicly broadcast the trial of Cardoso’s killers—a first for Mozambique at the time—which empowered local citizens. “That citizens were given access to the courts in this way, and they were able to follow a trial—they had the feeling that justice was being served,” she said.

What Donors Can Do

Titus recommended that to tackle the issue of impunity, donors should prepare local CSOs to secure, maintain, and use their observer status at the African Commission effectively. Observers are able to monitor states’ actions and bring the attention of the commission to human rights violations.

“I will always say—let local civil society take the lead because they understand the context. And anyone else who comes in should be there in a supporting capacity, to take whatever they’re doing further or to support them,” Titus said.

She said that training the judiciary, lawyers, and legislators on international best practice, media law, and human rights law is immensely valuable. She added that more emphasis could be placed on guiding legal drafters to approach policy-making from a human rights perspective.

“There is an increasing desire on the part of citizens generally to seek justice, to have a voice, to be included. If these mechanisms are available, we must create an opportunity for them to use that and to experience justice and inclusivity and move away from a scenario where they’re completely disempowered,” Titus said.

She emphasized that the issue of impunity must be addressed inclusively.

“When we are dealing with a democratic deficit,” Titus said, “it is important that we all come to the table equally and be represented when decisions are made. Most of the high-level consultations happen in Europe and the US, and you will maybe find one or two African faces there. That is not inclusion. That’s not multistakeholder-ism. That is not justice.”

There is a global crisis of violence against journalists. Most journalists who are killed because of their profession are local journalists working on local stories. Authorities, who are often complicit in attacks on independent media, cannot be counted on to hold the perpetrators to account without the right pressures and incentives in place. To foster lasting change, local actors must take the lead on efforts to combat impunity.

Sasha Schroeder is CIMA’s program and communications assistant. Find her on Twitter.