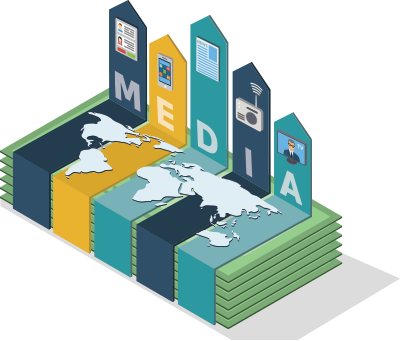 The information available on our website about donor funding levels and priorities is the result of an annual, voluntary survey that is sent to specific media development donors. All of the numbers are self-reported, and inclusion is based on donor willingness to participate. By profiling individual donors, we hope to capture some of the specific donor strategies that otherwise might not be captured in larger aggregate funding analyses.

Note: Includes only donors that provided 2016 funding numbers. All amounts converted to US dollars for comparability purposes.

Notably, this year we have added two important donors to the list: The European Commission and the Department of Foreign Affairs and Trade of Australia (DFAT) and. In addition to the new information provided by these two donors, we have been able to update data for fourteen previously profiled donors. Overall we now have profiles of twenty-three of the most important media development donors available on our website.

In many ways, 2016 was a watershed year in terms of popular recognition of the powerful role media plays in our societies. There was a general realization that the a weakened media ecosystem can be seriously detrimental to broader social cohesion as the spread of disinformation and media capture by political interests can distort the public sphere. In response, during 2016 and 2017 a number of donors announced increased financial support for media development. However, based on the responses provided to CIMA, these significant commitments have not yet been reflected in donor budgets.

The top five funding priorities as reported by donors who responded to CIMA’s latest survey provide an interesting snapshot of how many donors are targeting their support. The importance of priorities is self-reported by donors and does not necessarily correlate to the amount of money they are spending on each programmatic theme. Nonetheless, these are useful in understanding how donors conceptualize their work, and what type of projects they consider to be most needed. Investigative journalism, access to information, and freedom of information remain in the top five when compared with CIMA’s 2015 survey of donor priorities. New additions to the list include journalist training and direct assistance to media outlets, while business sustainability and internet freedom no longer appear. Given that worldwide the subscription and advertising model that has traditionally supported independent media has worsened over the past few years, it is perhaps no surprise that donors now appear willing to provide more direct assistance to media outlets for basic operations in order to keep them afloat. 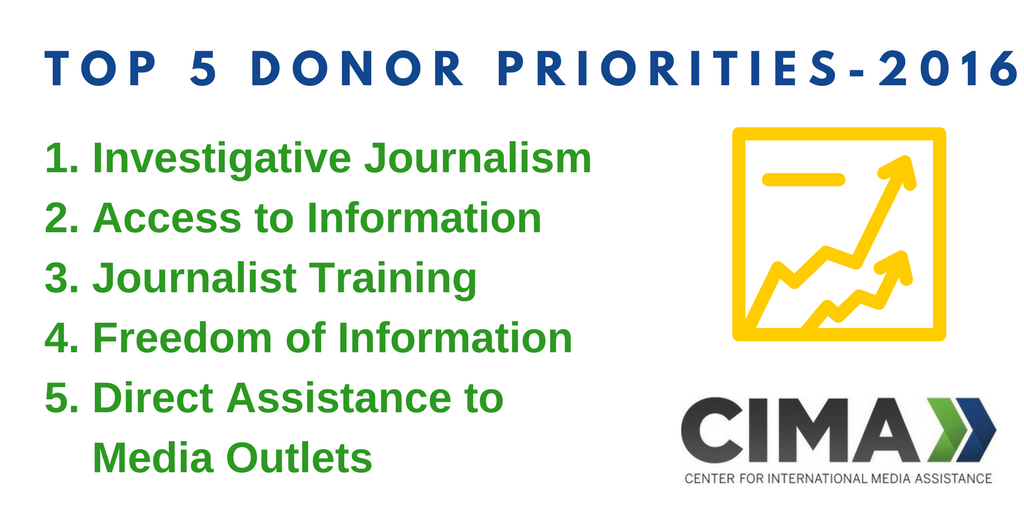 The Geography of Media Development Support

In order to truly understand the contours of media development donor, it is important to understand where donors are focusing their support. This year we asked donors to provide a more specific regional breakdown of their support. The responses illustrate how some donors have particular geographic priorities, like DFAT which operates exclusively in Asia, while other are much more global in focus. For example, upwards of 54% of the Open Society Foundations support is multi-regional. Going forward, observing changes in where donors are providing support will be useful in understanding their interests and strategies.


Next Steps: Building the Baseline for Tracking Media Development Support

Tracking levels of donor support and funding priorities for a specific sector, like media development, is not easy. This is due to a variety of factors, including a long reporting lag time for many large donors, as well as the fact that media development funding is often spread over a number of different departments and thematic areas. The lack of a common budget code for these projects makes tracking funding – even within donor organizations – quite challenging sometimes. However, without taking stock of current financial support for media development coming from donors, it is nearly impossible to know whether enough resources are being put to the task, and whether they are being directed in the right direction.

CIMA will continue our efforts to track media development support. This includes updating funding numbers and priorities on donors as the information becomes available to us. For example, the US Government is one of is one of the largest media development donors worldwide via State Department and USAID projects, however we have not yet received an update on their 2016 figures. More importantly, we will continue adding profiles on the important donors who we have not yet profiled.

As policymakers and philanthropists recognize the truly monumental challenges facing media development worldwide, the likelihood that we will see more dramatic changes in funding over the next five years is very high. By tracking individual donors over time, we hope to document these important shifts in funding and priorities.

Daniel O’Maley is the Deputy Editor and Digital Policy Specialist at the Center for International Media Assistance. In addition to managing CIMA’s donor tracking efforts, he also leads CIMA’s efforts to strengthen media development sector engagement in global internet governance. Find him on Twitter at @domaley.

Marguerite Sullivan, an independent media and communications consultant, conducted research and analysis that has made the 2016 update to our media development donor profiles possible.